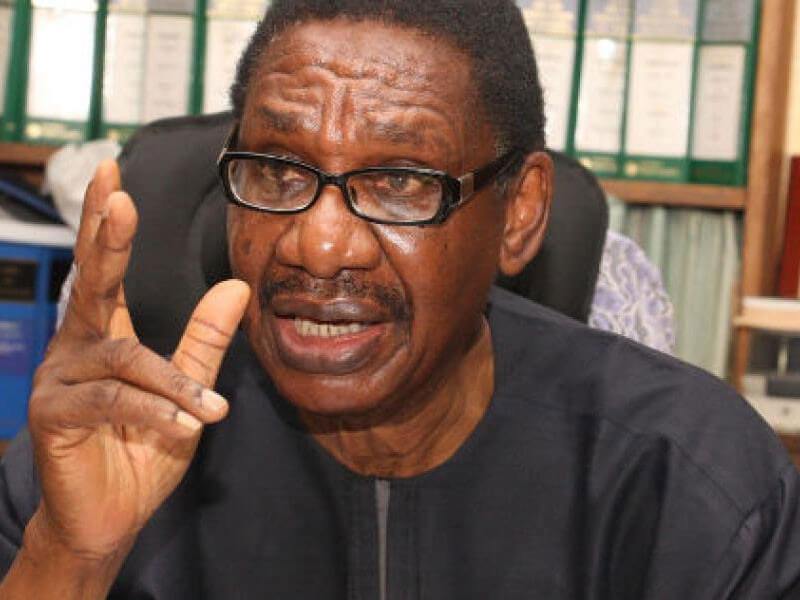 The Chair­man of the Presidential Ad­visory Committee Against Corruption (PACAC), Prof. Itse Sagay (SAN), on Tuesday berated the leadership of the ruling All Progressives Congress (APC) for accepting defecting governors from the Peoples Democratic Party (PDP). The legal practitioner chided the APC for lack of principle.

Sagay described the PDP governors defecting to APC as highly unprincipled people and opportunists who want to remain relevant in the public space at all costs.

Sagay also decried that the APC leadership acceptance of PDP defectors greatly embarrassed party members and an affront on the voters.

Sagay was cited to have declared in a media interaction: “On the issue of defections, I am extremely dismayed and troubled by that. I am also very displeased with the APC for ac­cepting all these people. These are opportunists who want to use the chance of joining APC to continue to remain in power and remain relevant.

“They are totally unprin­cipled people and the APC it­self is a highly unprincipled party for accepting people like that. Why should a gov­ernor who has contested and won election as a PDP man, why should we allow him to cross over to APC?

“That is an affront on the majority of vot­ers who voted for him. For me, it is a very bad situation, and it is not good for the image of the APC.

“On each occasion, oppor­tunism will carry the day, the people who have gone out to cast their votes will be terribly disappointed with such devel­opments.

“I am particularly disap­pointed in the Yobe governor, Mai Mala Buni, who is the APC caretaker chairman. He was put there to organise a convention. Up till now, he has not succeeded. Instead, he is going about buying PDP peo­ple to join APC. That to me, is unprincipled and it is embar­rassing to me as a supporter of APC”.

The defectors from the PDP to the APC in recent times include Governor Bello Matawalle of Zamfara State, formally received into the ruling APC on Tuesday; Governor Dave Umahi of Ebonyi State and Ben Ayade of Cross River State.

Senator Peter Nwao­boshi, Delta North Senatorial District in the National Assembly, had defected from the PDP to APC last Friday.

There are insinuations that Governor Okezie Ikpeazu of Abia State will soon join the gale of defection in the country.

It was gathered that APC is making overtures to Governor Ikpeazu to crossover to APC, in a plot to use the governor to emasculate the Senate Chief Whip, Orji Uzor Kalu, in Abia politics. The ruling APC may be apparently plotting to pitch Ikpeazu against Kalu in Abia State.

Share this on WhatsApp
Related Topics:All Progressives Congress (APC)Matawalle
Up Next