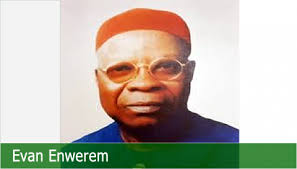 President of the Senate, Dr. Abubakar Bukola Saraki, on Monday stated that Peace in the National Assembly is necessary for the growth of the legislature, beneficial relationship with other arms of government and national progress.
Saraki, according to a statement by his Chief Press Secretary, Sanni Onogu, made the assertion in his speech as chairman of the 10th year memorial activities in honour of former President of the Senate, late Senator Evan Enwerem, in Abuja.
He lauded Enwerem for laying a solid foundation for the National Assembly in 1999, saying the 8th Senate has benefitted immensely from his legacy of peaceful and friendly disposition as President of the Senate.
Saraki said: “It is a lesson to all of us who are in the saddle of leadership today, that we could all use a dose of the Enwerem example when in the hot seat. He worked with those who had worked against his emergence as President of the Senate; he won their respect, and was able to turn many of them into dedicated friends.
“The result of that cooperation and partnership is part of what we are benefitting from today in the 8th Senate, and which we strive to the best of our ability to emulate. Peace in the National Assembly is necessary for the growth of the legislature and for beneficial relationships with other arms of government, as well as for national progress.
“Looking back, I think the late Senator Enwerem would be proud of how far the legislature has come in the Fourth Republic, and its contribution to the growth of democracy in Nigeria.
“We, of course, are proud of his contribution in laying the right foundations for us. We are standing on the shoulders of those who came before us, and the late Senator Evan Enwerem is notable among them.”
He stated that the book that was launched at the event in honour of Enwerem bears testimony to what he achieved, working across the political divide in 1999.
“We are told that he made it clear through his words and actions that he would strive for an inclusive Senate, and he worked for peace.
“He collaborated with his senatorial colleagues across board, irrespective of party or political antecedents, putting the country’s interest first,” he said.
He expressed hope that through the Leadership Foundation and the Lecture, Senator Enwerem’s legacy would live on and his ideas would continue to be propagated respectively to serve as a launch pad for the generation of new ideas that would enrich society.