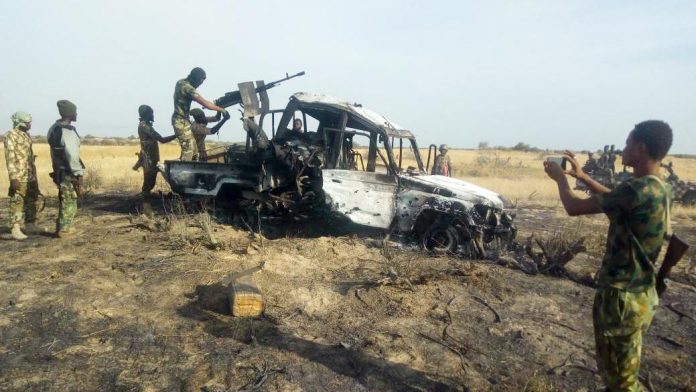 Scores of Boko Haram/ISWAP fighters have met their Waterloo on Sunday morning on their march to attack Aulari, a suburb of Bama in Borno State, National Daily has gathered.

According to reports, the insurgents, who were moving in four Gun trucks to Aulari, 11 kilometers away from Bama, were cornered and overrun by troops of Operation Hadin Kai.

The source also said the total annihilation of the insurgents was perfected by the Nigerian Air Force.

He said: “Local sources in Bama have revealed that attempt this morning at about 6.00am by Boko Haram/ISWAP to overrun Aulari, a location about 11km West of Bama failed as gallant troops of Operation HADIN KAI successfully waded off the attack while the terrorists had to retreat towards Sambisa Forest.

“A NAF A-Jet was subsequently scrambled to track them as they retreated and luckily, they were sighted in 4 Gun trucks which were engaged. After engaging the Gun Trucks with rockets, 3 were completely destroyed and burned while the other was immobilized.

“A number of insurgents were also neutralized in the process while others were in disarray”, he added.