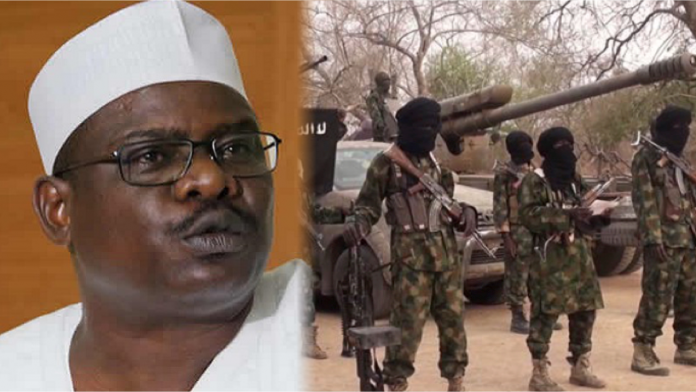 Borno Senator Ali Ndume has raised the alarm about ISWAP terrorists regrouping arund the Lake Chad after the Friday and Saturday shellacking by the Nigerian military.

According to him, the troops have been taking out key ISWAP commanders in Borno, but the intensity of the attack on Askira was worrisome.

He appealed other security agencies to give the Nigerian Army the needed support, considering the force is currently containing aggression in 33 states across the nation.

“I want to express my condolences to the Nigerian Army over the death of Brig-Gen. Dzarma Zirkusu, who died along Chibok road,” he said in an interview on Sunday as he reacted to Saturday attacks at Askira.

“ISWAP terrorists attacked a town there. They know that the General was the major obstacle to their operation. They laid an ambush and rammed a bomb-laddened car into his vehicle.

“He was a gallant soldier. He took the fight to the terrorists. His death has sent panic to people in that area.”

Ndume, who chairs the Senate Committee on Army,  said some people around that Chibok area have started thinking of relocating.

“Some want to go to Mubi and other places. We are trying to urge them to remain there. The insurgency is coming to an end.

“This is not the end, but the beginning of the end of terrorists. I know that the Army has what it takes to take the fight to them.

“There is a need to urge other security agencies to give the Army the needed support. We also need to urge vigilante groups to assist them.

“For now, we will assume that it was an isolated case. But the intensity with which they came is worrisome.

“They came with more than 10 gun trucks. They are also regrouping around Borno North. That’s the Lake Chad axis.

“The military is aware and the Air Force is providing surveillance in the area. It was a revenge mission. The Army has been taking out key ISWAP commanders and they had their revenge.

“Last week, for instance, they abducted relatives of the Emir of Askira. They also abducted some passengers along that road. If the Army sustains the temple, we will win this insurgency.

He noted that military equipment has been arriving gradually.

“We are monitoring. As a committee, we will go and see what had been brought into the country.

“This is an improvement. The Army is very rapid in responding. The Army is involved in about 33 states now. They’re under pressure.”