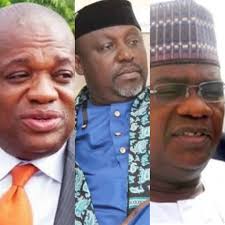 Socio-Economic Rights and Accountability Project (SERAP) has urged all former governors now in theninth Senate to “publicly commit to stop collecting pensions from their states while they serve as senators, return ‘pensions’ already collected to the public treasury, and push for the abolition of double emoluments laws for former governors and deputies in their states.”

SERAP in a statement today by its deputy director Kolawole Oluwadare said: “As members of the ninth Senate resume Tuesday, there is a lot at stake. The leadership and members must now take meaningful steps to improve citizens’ trust and confidence in the Senate’s authority and ability to positively impact on their lives, by embracing the values of transparency, accountability, responsibility, solidarity and respect for human rights.”

SERAP said: “Nigeria deserves a Senate that is fully committed to transparency, accountability, the rule of law, proper management of public resources, and human rights. It’s time for the leadership and members of the Senate to show the commitment and courage to end double pay for former governors among them.”

The statement read in part: “Given the large number of former governors in the ninth Senate that would be receiving pensions, the Senate leadership and members should be the loudest voice urging action against pension for life laws across many states. Senators are already receiving several allowances, including ‘severance allowance’, ‘welcome package’, and at least N15 million monthly allowance as senators.”

“Double pay and self-enrichment for ex-governors now senators have continued to contribute to ‘resource curse and the paradox of plenty’, with corrosive effect on governance and ultimately, respect for human rights, including the rights to quality education, adequate healthcare, clean water and regular electricity supply.”

“Double pay for former governors and now senators will continue to have a negative impact on the ability of the Senate to exercise constitutional oversight over the use of public funds and limit avenues for public accountability.”

“Payment of pensions to former governors in the Senate will continue to have an extremely negative effect on Nigeria’s development and the well-being of the population, particularly in the states with life pension laws. Life pension laws have depleted the public resources that would have been spent on the basic needs of Nigerians.”

“The Senate President, Ahmed Lawan should also use his political position and influence to sponsor a resolution and prevail on Senators to stop double pay for public office holders. Double pay for ex-governors amounts to misuse of public funds, as it diverts resources away from support for essential public services, invariably allowing politicians to maintain control over the political and economic resources of their states.”

“By providing the leadership on the matter, Senator Lawan will be sending a powerful message to his colleagues that public function is meant to be exercised in the public interest. Such public commitment and action to abolish double emoluments laws would also be entirely consistent with article 19 of the UN Convention against Corruption to which Nigeria is a state party.”

“Under the Certain Political Office Holders and Judicial Officers Remuneration Act, former governors who are lawmakers are already entitled to 300% of their basic salary as severance pay at the end of their terms as senators.”

“In Akwa Ibom, state law provides for N200m annual pay to ex governors, deputies; pension for life; a new official car and utility-vehicle every four years; one personal aide and provision of adequate security; a cook, chauffeurs and security guards for the governor at a sum not exceeding N5m per month and N2.5m for the deputy governor; free medical services for governor and spouse totaling N100m for the governor per annum, a five-bedroom mansion in Abuja and Akwa Ibom; and allowance of 300 percent of annual basic salary for the deputy governor; 300 percent of annual basic salary every four years and severance gratuity.”

“Benefits accruable to former governors of Edo State under the Pension Rights of the Governor and Deputy Governor Law 2007 amount to 100 per cent of the salary of the incumbent governor for life, an officer not above Salary grade level 12 as Special Assistant, a personal secretary not below grade level 10 who shall be selected by the former governor from the public service of Edo State.”

“In Osun State, the law guiding the payment of pensions to former governors and their deputies is cited as the Pension (Governor and Deputy Governor) Law 2001. The law stipulates that former governors and former deputy governors shall be entitled to pension at the rate equivalent to the incumbent office holder.”

“In Zamfara state, pension law allows former governors to receive pension for life; two personal staff; two vehicles replaceable every four years; two drivers, free medical for the former governors and deputies and their immediate families in Nigeria or abroad; a 4-bedroom house in Zamfara and an office; free telephone and 30 days paid vacation outside Nigeria.”

“Under the Lagos Pension Law a former governor will enjoy the following benefits for life: Two houses, one in Lagos and another in Abuja estimated to cost between N500m and N700m. Others are six brand new cars every three years; furniture allowance of 300 percent of annual salary every two years, and a close to N2.5m as pension (about N30m pension annually).”

“In Sokoto State, former governors and deputy governors are to receive N200m and N180m respectively being monetization for other entitlements which include domestic aides, residence and vehicles that could be renewed after every four years.”