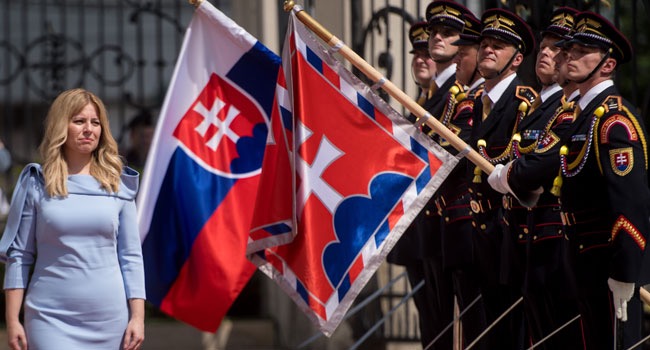 Slovakia environmental lawyer, Zuzana Caputova, was on Saturday sworn in as the first EU member female president, surprising observers with a speech that lacked the government criticism she was known for on the campaign trail.

The community activist, who ran on the slogan “Stand up to evil,” was largely unknown before she launched her presidential bid in the eurozone member of 5.4 million people.
The 45-year-old environmental lawyer won the March ballot with 58 percent of the vote in part to voter disillusionment with the governing coalition a year after the murder of an investigative journalist plunged the country into crisis.

“I did not come to rule, I came to serve citizens, and residents of Slovakia,” the liberal politician, who is pro-choice and promotes greater rights for same-sex couples, said in her inaugural speech in Bratislava.

“I offer expertise, I offer emotion and I offer a healthy activist approach. So I offer my mind, my heart and my hands,” she added alongside family, former presidents, politicians and members of her presidential campaign.

After the ceremony, Caputova walked to a nearby cathedral for an ecumenical service, shaking hands with people along the way, before hosting a lunch for seniors from across Slovakia.

Analysts called her inaugural speech surprisingly mild, given her past criticism of the government.

Caputova “does not want to divide, she wants to unite. She talks about the common good, a common path, often using the word ‘we’.”

Caputova was among the tens of thousands of protesters who took to the streets after journalist Jan Kuciak and his fiancee were gunned down at home in February 2018.

Kuciak was about to publish a report on alleged ties between Slovak politicians and the Italian mafia.

The premier at the time, Robert Fico, was forced to resign but he remains the leader of the ruling Smer-SD party and is a close ally of current Prime Minister Peter Pellegrini.

In her speech, Caputova declared unequivocal support for Slovakia’s membership in the EU and NATO and also spoke out in favour of protecting the environment.

“The process of global climate change must be slowed down and reversed, otherwise it can have major consequences,” she said.