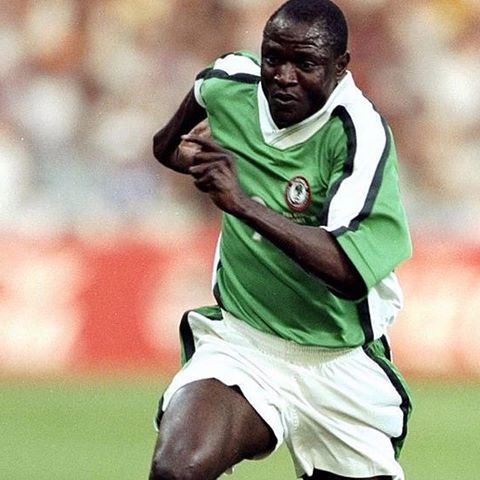 The dream of every human being  is to serve his country and be honoured and appreciated for life in return. The story is painfully the opposite with two  late Nigerian ex-soccer stars. Rasheed Yekini and Samuel  Okwaraji who explores the world.

Rashidi Yekini is  the highest goal-scorer for the Super Eagles of Nigeria – The striker passed-on five  years ago after suffering from depression – A good samaritan gave his aged mother some money to start business  – Alhaja Yekini cried for help, saying she has been abandoned and would not want people to kill cows when she is dead, instead, they should help while she is still alive Four years after the death of former Nigerian football legend, Rashidi Yekini, it has been confirmed that his mother, Sikiratu Yekini now sells bread, soft drinks and sachet waters as a means of survival National Daily exclusive gathered.

Not at all except Rashidi Yekini foundation, who organise yearly remembrance in his honour. The foundation also give and sponsor highest goal scorer award for Npfl players every season.

Although I am also aware that the Senate president gave some support for Yekini’s mother. Similarly, MTN organised who wants to be a millionaire also gave some to the mother.
.

The cause of his death is in public domain. His mother and his siblings abducted him and took him to some native doctors at Apete area of Ibadan all in the name of curing him of his alleged mental illness. He died three weeks afterwards in the hands of those native doctors.

Late ex -international soccer ,Samuel Sochukwuma Okwaraji  who played internationally for Nigeria. He was also a qualified lawyer who had a masters in international law from the University of Rome his spokesman Deji Ibrahim  recently told National Daily exclusively that federal government has disappointed the family .

Deji  told National Daily  that  well I feel the federal  and IMO state government has done little or nothing to honour  our late hero Samuel Okwaraji who died in 1989 while playing for the Nigerian national team,because no stadium or sporting event has been named as a mark of honour for the late hero and nothing much has been heard from the family since his demise.

Ibrahim explained to National Daily the family has not been pleased because the federal government failed to honour the promised made shortly after his demise,they promised building a sports and youth development centre as a mark of honour for the fallen hero but uptill date nothing has been done in that effect.

The spokesman Well Nigeria is not worth dying for because those who have laboured to bring pride and glory to the nation in world of sports are left to rot when they are injured or no more active,that is why on daily basis we lose our best sports men and women to the Europeans who know their worth and value,Anthony Joshua,Dele Ali and even Tammy Abraham’s who recently rejected his fatherland for England are all living examples.

He added to National Daily that although, former Imo-State Governor Achike Udenwa tried in his own capacity by naming a stadium after the soccer legend, which is another way of immortalizing him; but all that is not enough, as there are no signboard at the stadium; also, no statue of the soccer star anywhere around the stadium. I felt the issue of Okwaraji has even gone beyond the state; I propose it is something of federal concern. But because we don’t keep the record, that is why we don’t know the approach, not to talk of rewarding the family he left behind.

By my observation, people like Adokie Amiesimaka, Samson Siasia, and host of others have stadia name after them in Rivers, Bayelsa, and other states (I am not against it), but I believe people in authority should know better. I am challenging the federal government to have a re-think and name the Lagos National Stadium after the late Sam Okwaraji since we now have another National Stadium in Abuja, the Federal Capital Territory.

This is strategic, the player died at the stadium; why not name the edifice after him? If they do, it will go a long way by immortalizing the great hero who shed his blood while playing for the country in a more appropriate way. Not the image of his statue being put in front of the Lagos National Stadium. I am waiting patiently for the government that would do that! President Muhammadu Buhari should take note.

Mr. Okey Ezeh who is the Chairman of the Okechukwu Theodore Eze Foundation lamented  last year organised a football competition among the 27 LGA of imo state to honour Okwaraji

The family has been leaving in penury since his demise they claimed non of his team mate or member of the federation called them 26years after his demise and life has not been easy with them because Okwaraji was the bread winner of the family.

Yes,Okwaraji collapsed ten minutes from the end of a 1990 World Cup qualifier against Angola in Lagos and died from congestive heart failure .An autopsy showed that the 25-year-old had an enlarged heart and high blood pressure.