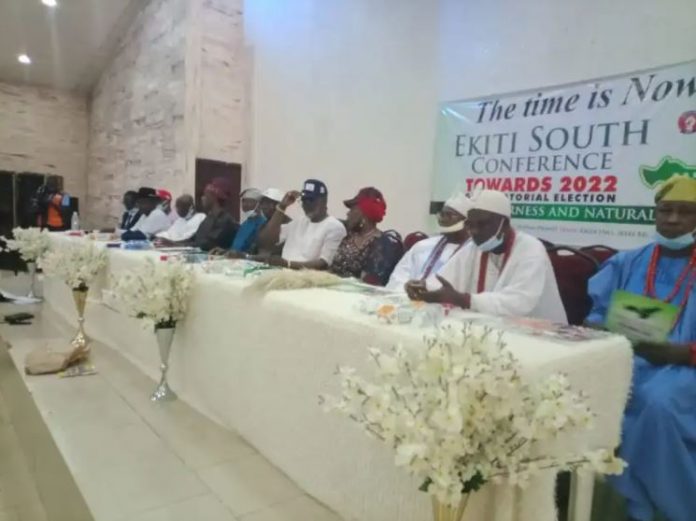 Stakeholders in Ekiti South Senatorial District have demanded the zoning of the governorship for the June 2022 election in the state to Ekiti South. Political actors from the zone ignored their respective party affiliations and loyalty to be united at a meeting in Ado Ekiti for consensus demand for the rotation of the next governor to their zone. The stakeholders collectively argued thatit is the right of the South to produce the next governor of the state.

The governorship ticket has been rotating between Ekiti Central and Ekiti North, each has produced three governors since 1999. The South has been kept out of the power equation of the state.

An elite group,  Ekiti Concerned Group, convened the meeting in Ado Ekiti, while being in the vanguard of the agitation for equity and fairness in the state, arguing that Ekiti South Senatorial District should be given the opportunity to provide the leadership of the state.

The advocacy group noted that Ekiti South Senatorial District has notable governorship aspirants for the June election in both the All Progressives Congress (APC) and the Peoples Democratic Party (PDP).

The governorship aspirants who participated at the meeting in Ado Ekiti include: Senator Biodun Olujimi (PDP), Hon. Femi Bamisile, APC member in the House of Representatives; Bolaji Aluko, Director General, Office of Transformation and Strategy in Ekiti State; Bamidele Faparusi, Commissioner for Infrastructure and Public Utilities, Kayode Adaramodu, PDP; beside others.