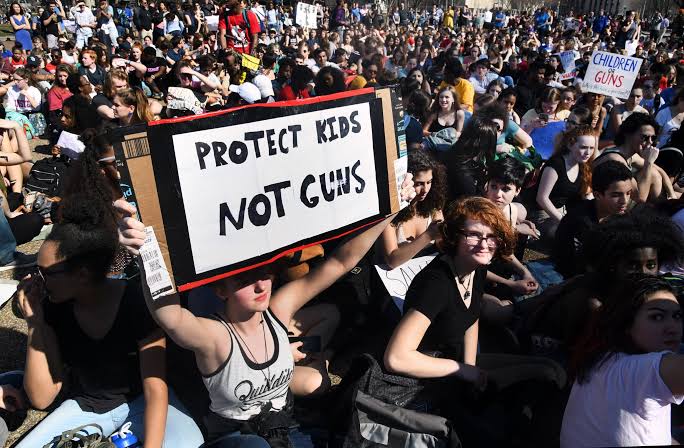 A day of turmoil and grief gripped America’s public schools Thursday, as thousands of students staged walkouts across the country to protest the Uvalde shooting in Texas.

Meanwhile, scattered threats of violence were also reported and quelled in the states of Texas and Colorado, local authorities said.

From the coast of California to Vermont’s northern mountains, students from more than 200 schools in at least 34 states plus the District of Columbia walked out to protest the Uvalde massacre.

Burlington, in northern Vermont on the shores of Lake Champlain, is 285 miles (459 kilometres) north of Newton, Connecticut.

There, the tragic Sandy Hook Elementary School shooting occurred a decade ago, the deadliest in American history, where 20 first-graders and six adults were gunned down.

Hundreds of middle and high school students gathered on the south Burlington football field to protest gun violence, which, according to the non-profit data collection organization, Gun Violence Archive, has hit 27 American schools this year.

At Green Level High School in South Carolina, hundreds of students filled the football stadium bleachers where they took turns reading reflections and other thoughts related to the Texas shooting, USA Today said.

In Oxford, Michigan, hundreds of students gathered on the school’s football field on Thursday, forming a giant “U’’ to show condolences on the tragedy in Texas, according to the Detroit Free Press.

Last November at Oxford High School, four students were killed and seven others wounded by a 15-year-old sophomore whom police said used a gun that his parents bought him as a gift.

On Thursday, when Oxford students left the school marching across the campus to the football stadium, they were greeted by applause from dozens of parents who parked their cars across the street.

On the West Coast, California had seen dozens of protests, including some 150 students who walked out of Crescenta Valley High School and students at El Camino Real Charter High School chanting “enough is enough’’.

In South Los Angeles, students holding signs chanted “protect our kids’’ at a walkout at Locke High School, with some signs asking “Are we next?’’ and “Put the guns down.’’

Also, there was a walkout in Santa Clarita’s Saugus High School, wherein in 2019 a 16-year-old killed two students and wounded three others before killing himself, and hundreds joined the protest.

In Hollywood, students carried signs that read: “Protect children not guns,’’ and “Fix this before I text my mom from under a desk.’’

“Shame on the people who watched my classmates die, and failed to act,” Sari Kaufman of SDA posted on Twitter Thursday.

“This time we will not be denied action. We will fight like hell because this is a life or death for our generation.’’

In Denver, Northfield High School was placed on lockdown Thursday morning and 2,000 students were evacuated after police received a report of an armed student on campus, the Colorado Sun reported.

“We had a foolish act’’, Denver Public Schools Superintendent Alex Marrero said at a news conference later, noting that two students were arrested.

The students were later released and a paintball gun was confiscated, authorities said.

Far from foolish were the arrests of four male students in Texas in connection to threats made against a Donna school, according to Valley Central News.

“We stopped an act of physical violence and harm on our students,’’ said Donna ISD Police Chief Donald O. Crist at a news conference.

In Mercedes, Texas, a 17-year-old from the Mercedes Independent School District was arrested at his home for making a terroristic threat, Valley Central reported, and on Thursday, the authorities arrested a teen for making a threat directed at Raymondville High School.

Schools were closed and classes cancelled in the Santa Rosa school district on Thursday morning as a precautionary measure, according to Valley Central news.

And in southern California, north of San Luis Obispo, police were investigating a possible threat to Atascadero High School on Thursday, according to the Paso Robles Daily news.

“Keep an eye on your kids; make sure about what they’re doing. Look at what they have in their rooms, be vigilant,’’ Donna Police Chief Gibert Guerrero said.

He said this when commenting on the four arrests in the region, according to local media KTSM 9 News.

Share this on WhatsApp
Related Topics:AmericacontinueProteststudentsTexas school shootingthreatsViolence
Up Next