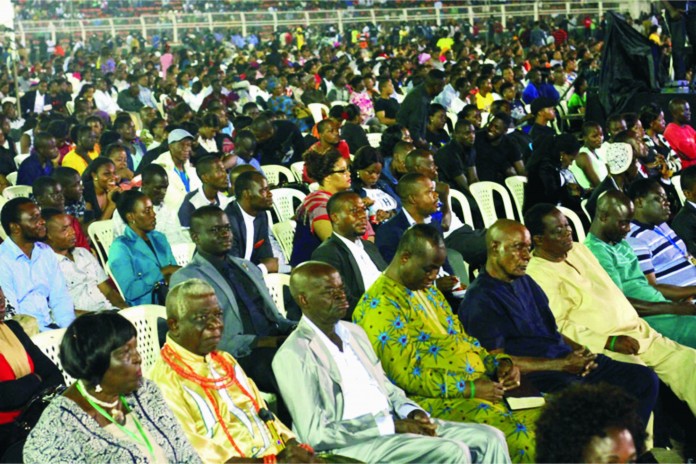 Records of Peter, Paul and their contemporaries leading thousands to Christ in singular evangelical exploits in the Acts of Apostles cannot begin to compare with the impact made by a man sent from God  Rev. (Dr.) Chris Oyakhilome  in the year 2016.

At the New Year’s Eve Service held at the LoveWorld Convocation Arena, and in several auditoria in every continent of the world, from the evening of December 31st 2015 to the early hours of this year, Pastor Chris declared according to the word of the Spirit that 2016 is ‘the Year of Spreading’! He declared that there would be a spreading of the BLW message and ministry, an unstoppable increase in all directions and a growth and dominion of the Word among God’s own people and their circumstances.

Nights of Bliss in Johannesburg and Ghana
Almost immediately, the extraordinary feats began to happen, kicking off with the Night of Bliss with Pastor Chris in Johannesburg, where over 60,000 people packed out the FNB Stadium, rejoicing in the rain. Miracles beyond words marked the historic event, but it was only the beginning of spreading.

On February 5, the man of God visited the nation of Ghana for the first time, hosting the Night of Bliss Accra in more than three packed out venues filled with tens of thousands. Government officials and men from every stratum of society were present, the anointing to spread unstoppably stillbeing manifest. Ghana was undoubtedly shaken to its foundations for Jesus and the people were blessed tremendously.

“It Shall Be Everywhere!”
One of the most remarkable features of the Year of Spreading was the ripple effect of Pastor Chris’ results in his soldiers and Generals throughout the world. From the smallest to the greatest, the world stopped to wonder at them.

Christ Embassy UK Zone 1 gathered 7,500 people in Scotland, Wales, London and other nations for ‘Word at Work’ in February. The same zone hosted 5,000 people for ‘a Day of Bliss’ in April, with many miracles bearing witness to God’s power present. In the same region, UK Zone 3 hosted online outreaches reaching up to 149 countries at a time.

Thousands of teenagers poured out to give their hearts to Christ at ‘Love Expressions’, hosted by Port Harcourt Zone 3 and ‘Perfect Love’ by Port Harcourt Zone 2, both in February. Still spreading into the world of teenagers, Christ Embassy Lagos Zone 1 did the unfathomable in the month of March, filling up the LoveWorld Convocation Arena and other overflow venues with over 20,000 teenagers who were imbued with divine ability to succeed.

The extension of the ministry’s message took over the nation of Uganda more than once in the year. 500 souls were saved at a crusade in Fort Portal, Uganda, earlier in the year and 7,000 led to Christ when the esteemed Rev. Tom Amenkhienan ministered at the Namboole Stadium in October 5,000 youths gathered in the same nation of Uganda in an unforgettable triumph of the BLW Campus Ministry.

In the month of March, 3,000 people convened at a special Miracle Crusade in Swaziland, where 700 of them gave their hearts to Christ. Several months later, Malawi witnessed a similar glory with 5,000 people experiencing the Word alive in signs, wonders and miracles.

Meanwhile, Christ Embassy, Cape Town, took the BLW message to 10,000 ministers in Pakistan. In Dubai and India, God’s Word was proclaimed in outreaches, in spite of opposition. The ‘Day of Bliss’ Dubai alone was a congregation of a thousand people, eager to be imparted with God’s Word in an Islamic nation.

Everywhere in Nigeria, God’s Word saturated the eyes, ears and hearts of the people in jaw-dropping programmes. In spite of threats of terror in Yola, Kaduna and Kano, fearless ministers of the Gospel moved as piloted by the words of Pastor Chris, holding public, sometimes outdoor, crusades where thousands gathered and several hundreds gave their hearts to Christ.

Christ Embassy, Asaba’s ‘A Day of Joy’, touched countless lives, being a celebration of the Word and outstanding miracles. Good Friday Miracle Night and ‘Do You Believe in Miracles?’ crusade hosted by Christ Embassy, Abuja, recorded hundreds of miracles in just one of each and over 25,000 in attendance at the latter.

The Governor of Edo State was present at a Night of Bliss in Benin, held in the month of March, where 788 people endorsed the Lordship of Jesus over their lives. In the same state, another Night of Bliss took place in Okada, with 8,000 people gathered and 750 giving their hearts to Christ. Miracles, as seen in programmes with Pastor Chris, were witnessed in each of these meetings.

In the month of October, Port Harcourt Zone 3 assembled men to God as sand on a seashore, in the presence of dignitaries, including the Deputy Governor of Rivers State. Yet again, in the same city, the Campus Ministry gathered 10,000 students and youths to hear God’s Word at a Youth Conference.

2,100 new converts were received into God’s Kingdom at the Calabar Miracle Crusade and 2,000 more translated from darkness to light at Warri Zone’s ‘Day of Bliss’.

In the trade-center of Nigeria, Lagos, nothing was spared by Pastor Chris’ protégés in breaking into every man’s world with the message of Christ’s power and love. Lagos Zone 1’s ‘Night of Bliss Special’ was attended by over 50,000 people at the Trade Fair Complex, Ojo, and in Jamaica, St. Kitts, Trinidad and Tobago, among other nations.

Lagos Zone 5’s ‘Total Experience’ at the Tafawa Balewa Square had thousands immersed in God’s showers of blessings, literally and figuratively. The miracles were miraculous! They are bound to be referenced for decades to come. Lagos Zones 1 and 4 held ‘Day of Bliss’ programs attended by thousands and marked by God’s power to heal.

Training and Equipping for Righteousness
These exploits from various parts of the world do not begin to capture all that ministers in Christ Embassy accomplished through the Word of the Spirit in 2016. Throughout the churches and in every continent, Super Sundays and other programmes designed to equip the saints were organized.

The LoveWorld Convocation Arena and many more locations throughout the globe became venues for the International Cell Leaders’ Conference and the International Pastors’ and Partners’ Conference with Pastor Chris, the former being a training programme and celebration of soul-winners and the latter equipping the ministry’s partners for greater works ahead.

In a groundbreaking occurrence, Pastor Chris shared the same stage with globally renowned healing evangelist, Pastor Benny Hinn, for the 2-Day Miracle Healing and Impartation Services, held at the LoveWorld Convocation Arena. The mammoth crowds at the arena and other overflows bore witness to the people’s hunger for a special touch from God.

During a special meeting with Pastors prior to the MHIS, Pastor Benny spoke prophetically concerning the ministry of the BLW President, saying “God is about to shake the world with him.” A glorious alliance was formed as Pastor Benny said on the last day of the conference, “I stand with him [Pastor Chris]!”

Mighty miracles were wrought like the nation has never witnessed before, and in the presence of thousands, Pastor Benny declared a special blessing upon the nation of Nigeria.

A Message Uninhibited by Borders
Without a doubt, the message and ministry of the man of God, Rev. (Dr.) Chris Oyakhilome, reached into every nation of the earth in 2016. Over 300 million copies of the Rhapsody of Realities, currently published in 807 languages, were distributed in every nation of the world, making sure that the ‘Christ-in-you’ message of the BLW President penetrates every corner of the world. Just weeks ago, the Rhapsody of Realities hosted an Online Prayer Conference for partners, with over 1 million people registered and more than 745,000 participants.

Through the Healing School, over 150 nations were touched by the healing ministry of Pastor Chris. Thousands were healed at sessions in Johannesburg, Toronto and Lagos. 5,000 senior ministers from 149 nations were equipped for bolder, more powerful, work for the Lord Jesus as Pastor Chris taught at the International School of Ministry’s Ministers’ Network Conference. Youths from 70 countries were raised to live God-ward, influencing their world for Jesus, at the Easter Youth Camp in Johannesburg. These youths went on to do exploits, gathering thousands in 200 nations, through the efforts of the Global Youth Leaders’ Forum.

Celebrating a Timeless Hero of Vast Proportions
Throughout the world, on this day, thousands who have been impacted by the ministry of Pastor Chris celebrate him specially on his birthday. Many began to do so on Saturday, December 3rd, with acts of service rendered in his honor, reaching the homeless, the orphans, the sick, the impoverished and the communities with solutions and answers.

Today, we salute a champion, one who places a premium on the souls of men and their fulfilment with eternity as the singular yardstick of measurement. With every prophetic word come to pass, every revelation of God’s word unveiled, every sick healed, we are reminded that there is a man sent from God, whose name is RevChris Oyakhilome, PhD, DSC, DD!