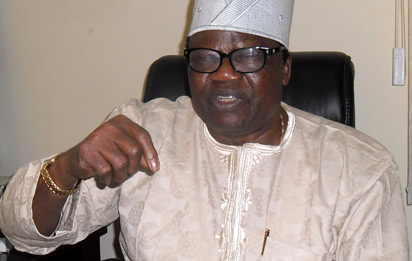 In the course of the past one year, the Nigerian nation grieved under the burden of the oddly toll of deaths and the ensuing torrent of sorrow and heartaches. As once illustrated by William Shakespeare in his classic, Julius Caesar – “the heavens themselves blaze forth the death of princes”, so certain of such transitions even a year after, continue to make headlines. A case that came as a squall to the country is that of former Information Minister, Prince Tony Momoh, whose death on Monday 1st February 2021 at the age of 81; now one year in memoriam.

Beyond his life-long engagement in the fourth estate of the realm, what made him stand out, was the candour and display of objectivity, which he brought into the profession. In his heyday, he departed from subjective predilection which tended to be commonplace with some peers. Added as a journalist, his understanding of the dynamics of the country’s geopolitics and sociocultural dynamics enabled him play sterling roles and handed down phenomenal impact, in our uncharacteristic world of politics and statesmanship.
Later in life, the spectacular way in which he entered into politics saw him play pivotal roles at very critical times in Nigeria’s political history.

BACK TO AUCHI CRADLE
Named after the nationalist, Chief Tony Enahoro (1920-2010), who in 1953 moved the motion for Nigerian independence, Prince Momoh was born on 27th April 1939 in the town of Auchi. His ethnic kins, known as Etsako are the major group that occupy three of the 18 local government areas in Nigeria’s Edo State. His hometown is the second largest community in the state and headquarters of the area once referred to by the colonial authorities as Kukuruku Division.

Relatively cosmopolitan, Auchi became a major centre of socialisation of all the motley of ethnic groups and subcultures of Edo North. Auchi was and is still, also the buffer between the people of the deep south and ethnic groups in Nigeria’s north central Belt. These are such ethnic groups as Ebira and Igala both in Kogi State, as well as Nupe in Niger State. This is besides large numbers of others, including Hausa, Fulani and Yoruba who have settled for many generations and are now full indigenes of the town.

As far back as 1884, the Catholic Church entered the area and by 1897, opened a Parish Station at Agenebode – one of the outlying towns. However, Auchi also became an oasis for Islam in a predominantly Christian part of Nigeria at the beginning of the 20th century. Interesting enough, these faiths have with a rather unique ingenuity, weaved together a community of shared future.

Quickly, the town also became a hub for some common state institutions, such as one of Nigeria’s first tertiary Institutions, the Auchi Technical College, which was upgraded as Auchi Polytechnic in 1963. With a rather optimistic motto “hands and brains for development”, Auchi Polytechnic became a major attraction point to all. That institution still remains a well-ranked citadel of learning in Nigeria.

LARGE FAMILY, LARGE HEART
The cradle of Prince Momoh’s life therefore was greatly underpinned by a tidal flow from the environment of a buzzling bustling 700-year-old town in which he was born and grew up. Indeed, it was a kind of “little London” for all, thereby broadening his outlook to life. This was enriched by the fact that the patriarch of his family, King Abubakar Keremi, Momoh 1, the 8th Otaru of Auchi who ruled from 1955-1970 and having fathered about 257 children bred a notably large household. Prince Momoh himself was midway, number 165th in the roll call of siblings.

He therefore grew up in such an uncommon ‘nuclear’ family, learning to be accommodating, amendable and considerate. And as such, life’s outlook was neighbourly and quite disingenuous in tailoring and shaping his reflexes for upward advancement. Expectedly, the fight for survival was high and intense, but was said to have been healthy and fraternal. This was so, as Prince Momoh’s father, from all accounts, was a strong natural ruler who insisted on instilling in his children, as many as they were, the sterling values of decorum and inter-personal ties.

TRAINING AND HANDS IN JOURNALISM
After completion of primary education in some local schools around Auchi area, he started life as a teacher. Indeed, he had been trained at the Teachers Training College, Abudu and later on 1960-61, at Abraka in present present-day Delta State. For his tertiary education, Momoh studied Mass Communication at the University of Nigeria Nsukka (UNN), from 1964-66. Further in life, perhaps to strengthen his journalistic career, having become greatly passionate about issues of human rights and the boundaries of civility, he went on to read Law at the University of Lagos. He was called to the Nigerian Bar in 1975.

On the backdrop of his training at UNN, he was head-over-heels to pursue a life in journalism. This started in 1962 when he joined the Daily Times Newspaper (DTN) of Nigeria. It is worth recalling, perhaps, that DTN, which was established as far back 1925, was one of the most renowned newsprints in Anglophone colonial Africa. After it was started by the trio – Richard Barrow, Adeyemo Alakija and V.R Osborne – with a conservative outlook against colonial rule, the paper took an outspoken bearing when they brought on board, father of the Nigerian journalism profession, Ernest Sisei Ikoli (1893-1960) as its First first Editor-in-Chief. It was from this pedestal that Ikoli, Alakija, Oba Samuel Akinsanya, along with Prof Eyo Ita (1903-1972) went into politics forming the Nigerian Youth Movement (NYM) in 1934. Afterwards, these three became the stimulus to the activism of the younger firebrands like Dr. Nnamdi, Azikiwe, Chief Obafemi Awolowo, Dr. Eni Njoku, Bode Thomas, etc. who joined them shortly afterward.

By 1970, Momoh’s DTN had become the trailblazer within the sector in Nigeria, to the extent that the federal government acquired 60% of its shares in 1975. The paper equally became the training ground for all major media practitioners in Nigeria. Momoh quickly rose through the ranks to become Editor and by 1976 was promoted Deputy General Manager; the second in command in the organisation.

In his actual professional practice, he was fearless, and acerbic. He was almost sardonic in political satires, and ruffled quite a few powerful feathers. It was no surprisetherefore, that both the Senate and the House of Representatives of the Second Republic (1979-1983) separately, pursued legal reliefs in court against him. He was sued for under libel and contempt as he refused to appear before them.

THE YOKE OF MILITARY ENTANGLEMENT
In the government of General Ibrahim Babangida, which soon found itself at the helm of affairs in Nigeria and lasted from 1985 to 1993, Momoh was called to serve as Minister for Information and Culture. He held that office from, 1986 through 1990. Sadly, under a military dictatorship, the period tended to become a throbbing point in a worthwhile journalistic career. The Auchi Prince found himself, rather embarrassingly, in the middle of what seemed a threefold mandate. Ensuring high level of professionalism, ensuring that Nigerians were well well-informed about the activities of the Government, and finally becoming the bellwether for propagating the peace and unity of the county amidst a dictatorship in place.

Quite many moments of suspense and complexities came with political exposure. For example, such high-profile events as the murder of a younger professional colleague, Dele Giwa (1947-1986), Publisher of the anti government Newswatch Magazine just after he assumed office still remains a scar. In general, his new office was a great challenge as his duties needed defending the indefensible, being the mouth-piece of a military government, which even in its most benign form is a dictatorship. His no-nonsense profile as it pertained to civic activism also became sufficiently dented in an ambience where human rights were at best tolerated. He finally bowed out of the government in 1990, three years before his boss, Gen. Babangida also stepped down from office.

DIVE INTO PARTISAN POLITICS
Following the footsteps of the pioneers of the journalism profession in Nigeria, it was not surprising when that Momoh’s exit from DTN and ministerial office, saw him enter into partisan politics. With the planned return of Nigeria to civilian rule in what is now known as the Fourth Republic, he became a member of the Peoples Democratic Party (PDP). At the time, he was Director of Campaign for a Former Vice Vice-President, Dr. Alex Ekwueme (1932-2017) who contested unsuccessfully for the Presidential ticket. Later on, with internecine schisms within the PDP, which ruled Nigeria, 1999-2015, Momoh left to join its rival, the All Nigeria Peoples Party (ANPP). Thereafter, he moved along with his political ally, Muhammadu Buhari, incumbent President of Nigeria, to form the Congress for Progressive Change (CPC) where he was appointed National Chairman in 2009.

In the ensuing cartwheel of political change in Nigeria, he was among the frontline politicians who led the CPC into further political alliance to form the ruling All Progressives Congress (APC), which saw the emergence of Buhari as President in 2015.

In the rest of his public service career, Momoh was at different times the Chairman of the Board of the now defunct Nigeria Airways (1992-1999), Member of Economic Advisory Committee of his home state, Edo and Doyen of the Nigerian Press Council. Ironically, he was at a time, also a Board Member of Newswatch Magazine of which his murdered friend – Dele Giwa. Besides his journalistic work, he was widely-published and particularly renowned for his “Letters to my Countrymen”, a collection of political parodies.

Apart from his own royal lineage, by his own right, he held the traditional title of Yerima of Auchi.

AN ENDING WORD
A lesson of great worth is the realization, that Prince Momoh’s service to society was conducted with simplicity and visible thriftiness. Both in and out of public life, he lived modestly. He has, no doubt, succeeded in bridging the gap between life and death. Perpetually, he continues as it were, to speak to the Nigerian society even in death, with a clear voice.

Even more, though he is now counted as late and fated to history since a year ago, the impact of his life’s works, founded on virtue, honour and service, in no little measures reverberates aloud.

Share this on WhatsApp
Related Topics:Dr. Godknows IgaliPrince Tony Momoh
Up Next