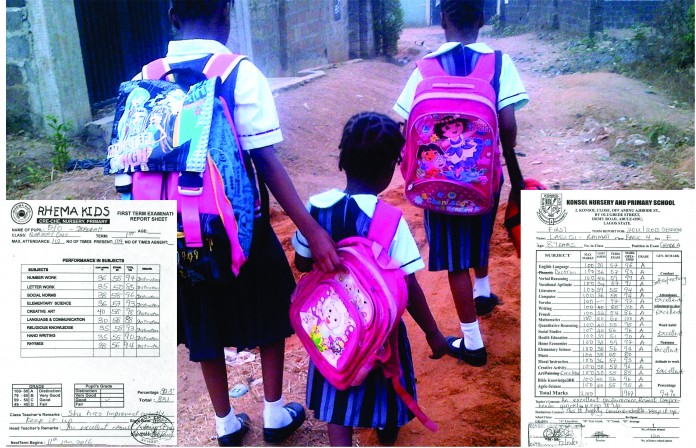 Primary school pupils in Nigeria are at risk!. No thanks to an overload of class work and extra coachings they have to grapple with at the expense of their health.

EARLY childhood education experts say that an average child should be developmentally ready for the rigour of primary education at age 7, or at the earliest five years old. Not at four years when most parents would have rushed them through pre-school, kindergatten and nursery classes in what scholars described as ‘theater of early performance’.

And child psychologist, Olumide Ige is not in any way ambivalent on whether fragile brains like 5-year-old Ayotomiwa Fasosin should be burdened with a little over ten subjects in the classroom and another session of extra coaching at home as they begin their journey through formal primary education at Basic 1.

The Early Childhood Education expert at the University of Lagos says it’s a practice that negates the principles of maturation, and can be counter-productive in the long run.
“the child who finds it difficult to cope with the academic pressure imposed on him by huge workload soon becomes frustrated and overwhelmed with a sense of under-achievement that may lead to loss of interest in learning and schooling altogether.”

Olufunke Fasosin,for one, does not need an expert pontifications to conclude that her two daughters, Ayotomiwa and Ayobami, are experiencing an unhealthy exertion from their class workloads already.

“The truth is that my daughters’ school engage them so much , and that hardly gives them time to play with their friends.’

‘Am told that if you don’t finish your work before the long break, you will only be allowed to have your meal, but you have to remain in class to catch up. So, sometimes, the girls will beg me to wait for them after school hours to catch some fun before I eventually take them home,’ she narrates.

September 2014, at the launch of the revised 9-year Basic Education Curriculum, [BEC], Executive Secretary of National Educational Research and Development Council [NERDC], Godswill Obioma gave an unflattering verdict that confirmed the grave concerns of parents like Olufunke Fasosin. He admitted that there was an overload of subjects offered to pupils and students in Nigeria.

“After the assessment, we discovered that the subjects offered were many. We presented the issue at the Presidential Summit on Restoration, Reclamation and sustainance of the quality of education in Nigeria. NERDC was directed by the federal government to revise the 9-year BEC in terms of its subjects…”

The result of that presidential intervention yielded a let-off, at least on paper, for the overwhelmed young minds—leaving the BEC pruned to 20 subjects, including new subjects such as Basic Science, Basic Technology and Computer Science/ICT. And out of the 20 subjects, primary school pupils were expected to take a maximum of 11 subjects while those in the junior secondary classes take 15, the NERDC Executive Secretary revealed.

They were also expected to offer at least one elective subject from three options of Agriculture, Home Economics and Arabic Language.

Ditto for pupils in Primary 46. Except for the addition of French Language.

The NERDC has since again whittled down the subjects to seven for primary school pupils, National Standard learnt, apparently to keep up with best practices in other climes like Kenya, United States, Uganda etc where the maximum subjects offered by a primary school pupil is not more than eight.

Well, spare the NERDC the noisemaking. In the ubiquitous private nursery and primary schools mushrooming across the nooks and crannies of Nigeria,the breather promised by the curriculum revision can, at the very best, only pass for a direct opposite of what pupils like Raimat Lasisi experiences in her KONSOL Nursery/Primary School in Egbeda, a densely-populated surburb of Alimosho Local Council in Lagos. Now in Primary 6, the 9-year-old girl has been contending with no less than 21 subjects since she was promoted to Primary 4 two years ago—all with their different textbooks that combine with the notebooks to make the young girl appear like a hunchback as she trudges to school on a good day.

The textbooks are a must-buy really, National Standard investigation discovers, so the poor girl does not have any choice than to bear the burden at any rate.
Trapped in A Brand Crossfire

A perplexed PROFESSOR Olusegun Kolawole can only wax emotive as he wonders why Raimat and others like her have to endure the stress, despite the drastic revision of the curriculum.

“It is not right for any primary school, be it public or private to have more than seven subjects’, he groans.

But for Toyin Ogunleye, a Marketing Executive who’s spent a decade pitching books from different publishers to most private schools in Lagos, the pressure on these kids could not have been otherwise.

ALSO SEE: Why we are prioritizing infrastructural development in schools —Ambode

There are over a hundred book publishers in Lagos alone, he reveals to this newspaper, all of them flaunting various tempting inducements in the faces of private school owners.

Therefore, these proprietors are buoyed by greed, in the face of lax regulation from the government, according to Professor Kolawole, to leave the curriculum in its fragmented state so they can force the textbooks on their pupils and earn extra cash incentives.

“all a publisher need to do is to buy the curriculum from NERDC and commission authors to produce the textbooks which they in turn sell to these schools.”

And most parents like Sola Ibrahim, buffeted by ignorance and sometimes misinformation, turn out to be the victims of the conspiracy.

“My daughter’s school says the textbooks are compulsory, so no pupil can resume without paying for all of them in addition to the school fees,’ she narrates.

Sola’s daughter, Nifemi Ibrahim, is just 5 years and in Basic 1, but the little girl is exposed to about 16 subjects in her ST. Gabriel Flourishers School in the Ikotun area of Lagos, all of them attached to their different textbooks.

“They are not helping matters at all,’ a concerned Rachael Mark gripes, ‘they change the cover of a textbook,change the number of pages and say it’s volume 2 and that the previous was volume 1. And the school will make it mandatory for kids to buy it all because of the commission.

“Apart from buying the textbooks, they end up asking you to buy additional workbooks for virtually all the books. In the past,a child can use one bag for close to 2-3 years, but right now,because of the quantity of books dey take to school, the bags wear out on tyme,’ the mother of three laments.

Double Tragedy for the Future
Both Ayotomiwa and Ayobami Fasosin are lucky to be pupils of Olu Emmanuel Schools in Igando where they can, at least, stain their uniforms as they scramble for a place on the dusty slides and swings alongside their friends. Some of these schools don’t even have recreational facilities, National Daily investigations discovered. And parents, apparently too busy trying to earn a living or ignorant of the essence of recreation for their children in the first place, don’t bother to complain.

So for most of these pupils, it’s all work and no play—which ultimately predisposes them to both psychological and mental hazards in the future, according to experts.

Rachael Mark can’t agree any less. “Even the health of the children are threatened. You see kids complaining of backache, tiredness,stress etc. All because of the heavy load they take to school.”

But Dr. Ige says Rachael’s revelation might just be the beginning of a bigger problem for the overwhelmed school children. Childhood stress, fatigue, feeling of being a failure, childhood depression, loss of self-concept, loss of self-esteem, frustration, burnout, loss of focus, and increased rates of school dropout, etc. are some of the psychological and mental spin-offs that could result from exposing pupils to so much so soon, he disclosed to this newspaper.

And that’s not just an unnecessary alarm really. Imagine a 5-year-old who is exposed to about 16 subjects in a term. Psychologists say he will not only cope with pressure from the teachers to achieve in class, he will also be coping from exertion from his parents to justify school fees and all other fees they are paying to keep him in school. And then, there is the ridicule from peers who might seem to be achieving perhaps on account of maturation variation, readiness, age, etc.

It’s just a matter of time. Soon, the young minds are bound to crash under the burden they are forced to carry.