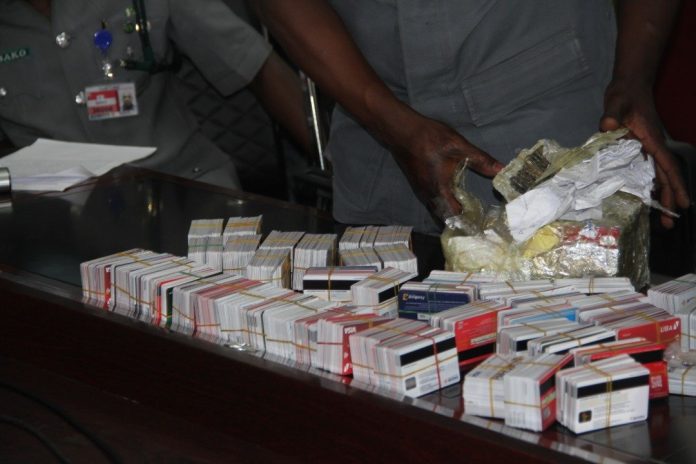 A Dubai-bound Nigerian was caught with no fewer than 2,886 ATM cards and four SIM cards at the Murtala Mohammed International Airport on Thursday.

Officers of the Nigeria Customs Service suspected the man identified as Ishaq Abubakar before thoroughly scanning his luggage packed with noodles inside which he stashed the cards.

According to Deputy Comptroller, Enforcement, Abudulmumuni Bako, Abubakar claimed he was coming from Kano to travel to Dubai aboard the Emirate Evacuation flight.

The suspect was however seen squired by somebody.

“This raised the suspicion of the officers who insisted he should be physically and thoroughly checked after the scan machine had revealed he was carrying parks of noodles”, he said.

The suspect has since been handed over to the EFCC

“On behalf of the Commission and the acting Chairman, Mr. Muhammed Umar, we have taken over Ishaq, and I can assure you that we are going to investigate the matter thoroughly and unveil everybody involved in the syndicate,” said EFCC’s Lagos Zonal Head Abdul Rasheed Bawa.

Bawa said there are a number of possibilities, and perps might likely include banks, bank officials, dark money networks, and others.

“In recent months, we have observed a trend in which unsuspecting Nigerians are lured into opening accounts to be bought at a fee. Most bankers are not carrying out their duties with due diligence, particularly the Know Your Customers, KYC, procedural check”, he said.