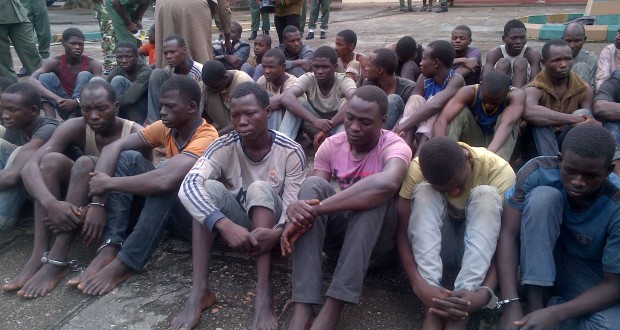 Share this on WhatsApp
Spread the love
The federal government has resumed the trial of suspected Boko Haram insurgents detained in various locations of the country.
A press statement by the Special Adviser to the AGF on Media and Publicity, said on Sunday that the second phase of the trial at the Kainji detention facility in Niger State would begin on Monday
“Resumption of trial arose from the conclusion of investigation of over 1,000 suspects as ordered by the court during its proceedings of October 2017 by the Office of the Honourable Attorney General of the Federation and Minister of Justice,” Salihu Isah.
He explained that suspects with prima facie cases would be prosecuted, while others without it would have applications made for their discharge.
Those discharged will undergo a process of de-radicalisation, which he said would be conducted by the Office of the National Security Adviser, and after that, the concerned suspects would be released to their various families.
The concerted effort of the Federal Ministry of Justice and the Office of the National Security Adviser kicked off in Kainji, Niger State on Monday, October 9, 2017.
“Four judges were allocated to four dedicated courts to handle the trial located in a military facility in Kainji while defence counsels were provided for those suspects without capacity to hire private legal practitioners to defend them.
“Unlike the first phase which was restricted, this phase is opened with some civil society groups, including human rights organisation and journalists invited to witness the proceedings.
“Already, about 82 Boko Haram detainees have so far benefitted from the Federal Government’s window to plead guilty to secure low jail terms or unconditional release which is part of President Muhammadu Buhari administration’s concerted effort to boost its human right records and decongest the nation’s prisons.
“As a result, about 45 convictions have also been pronounced by the trial judges in the four syndicated courts established by then acting Chief Judge of the Federal High Court, Abuja, Justice Abdu Kafarati. The various Boko Haram suspects were sentenced to jail terms ranging from two years to 15 years and with most of them backdated to the date of their detention.
“There are four categories of suspects at the Kainji detention facility who are classified as Boko Haram suspects who were hitherto investigated by the Joint Investigation Team set up by the Defence Headquarters otherwise known as DHQ/JIT.
“The case files of the suspected insurgents were then transmitted to the Honourable Attorney General of the Federation and after a careful review of the cases based on their individual merit, it was discovered that they have no prima facie cases that will sustain a charge against them in any court of law.
“As a result, they were recommended for release and hand over to the Office of the National Security Adviser for rehabilitation and/or de-radicalisation.
“The second category is the set of suspects that the Honourable Attorney General established prima facie cases against and charges already filed at the Federal High Court, Abuja Division who are also mostly in the detention facility under reference and may be willing to plead guilty for a lesser sentences.
“The third category are the suspects whose case files are either recommended for further investigation or that have no investigation conducted on them at all hence they do not have case files that will warrant the Honourable Attorney General of the Federation to form any opinion in respect of their case.
“Also, the fourth category is that of the suspects whose cases were reviewed and a prima facie were found and may be willing to opt for a full trial.”
Hundreds of suspects were released after the first phase when there was no evidence confirming their membership of the terrorist organisation.
Share this on WhatsApp
Related Topics:Abubakar Malami (SAN)Attorney General of the Federation and Minister of JusticeBoko Haram insurgentstrial
Up Next

32 herders on trial in Benue