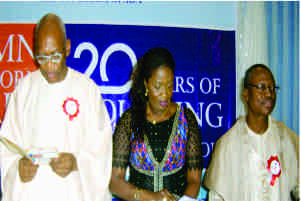 THE event hall of the Lagos Sheraton Hotel Ikeja was filled to its brim penultimate Saturday at the 20th anniversary celebration of Trinity International College’s, Alumni Dinner and Award Night, which featured competence, quality and glamour, as initiators and old students of the institute expressed their gratitude for having been tutored to glorious heights.
The Chairman, Trinity Board of Governors, Pastor Samuel Olatunji, stated that the existence of the institute is anchored on God’s grace. Giving a trajectory of the journey so far, he noted that the school began in a four-room apartment in Ikeja 20 years back before moving to its permanent site at Ofada, Ogun state, adding that it was built on friendly ties and bond which sustained it thus far.
Long service awards were also given to Mr. Olufemi Apata, the Principal of the Senior High School as well as Mr. Anthony Achidume who had put in 19 years, followed by Miss. Anne Sunday 18 years and the Mr. Olajide Sunday with 10 years and having churned out (80 percent) A-grade students in geography over the years. Miss Omolara Oluwakemi, the front desk officer, was also given an award for meritorious service.
The Ogun State Commissioner for Education, Mrs. Modupe Mojota, in her remarks at the event charged all present to act more and talk less to build a worthwhile future for coming generations.
She, however, pledge to make everyday count in the ministry where she superintends.  “I will do all I can to secure the future, creativity is the leeway out of the tight corner in which Nigeria is now,” she said, noting that it calls for all to be resourceful and this spirit should be instilled in our children for the future we desire to be guaranteed.
Barrister Wemimo Adepoju Ogunde (SAN), who chaired the 20th anniversary of the Trinity College, hinted that the quality of a man’s live is spelt out by the number of lives such and one impacted positively.
He emphasized the need for every well-meaning Nigerians to give back to the institutions that at one time or the other groomed them, through existing alumni bodies and other means.
Barr. Wemimo,  the son of the late doyen of theatre art and popular entertainer, Herbert Ogunde stressed that why Nigeria’s educational sector is going down is because it is left to the government to manage. According to him, great schools in the world, like Harvard, is what it is today due to the concerted efforts of the alumni. “Same is responsible for facelift in Igbobi College, I want parents to look the way of the schools,’ he said.
He further said the greatest of Nigeria’s problems is not corruption, but the rising population of youths who are groomed as consumers rather than conceivers of ideas. “We all need to go back to our alma mater and make things work,” he said.

Share this on WhatsApp
Related Topics:Trinity International College
Up Next

“Our products are making impact”