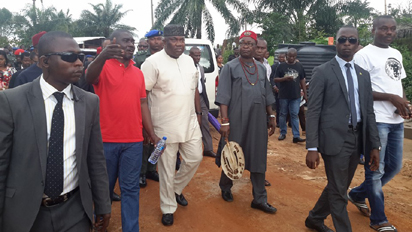 Governor Ifeanyi Ugwuanyi of Enugu State, on Friday visited Eha Amufu community which was attacked by herdsmen, who killed some residents of the community.

Ugwuanyi said on Friday that the visit was to obtain first-hand information about the issues that led to the recent crisis in Aguamaede and Mgbuji communities.

The visit took them to Mgbuji community and different forests in the area, and markets, village squares and other locations in Eha Amufu.

He interacted with the people to ascertain causes of the recurring crisis in the area with a view to addressing them.

Ugwuanyi sympathised with the people and assured them of his administration’s commitment to their safety and wellbeing, as well as permanent resolution of the crisis.

Members of the community, in separate remarks, appreciated the governor for the rare visit at night and his commitment to ending herdsmen attacks in Eha Amufu.

They pointed out that Ugwuanyi was the first governor to visit Eha Amufu over the lingering crisis and thanked him for the N10 million he released for the immediate needs of the victims, among other interventions.

Ugwuanyi, had on Nov. 23, released N10 million for the immediate needs of displaced victims of the clashes and medical bills of those in hospital.

Relief for APC as Action Alliance disowns litigants against Tinubu