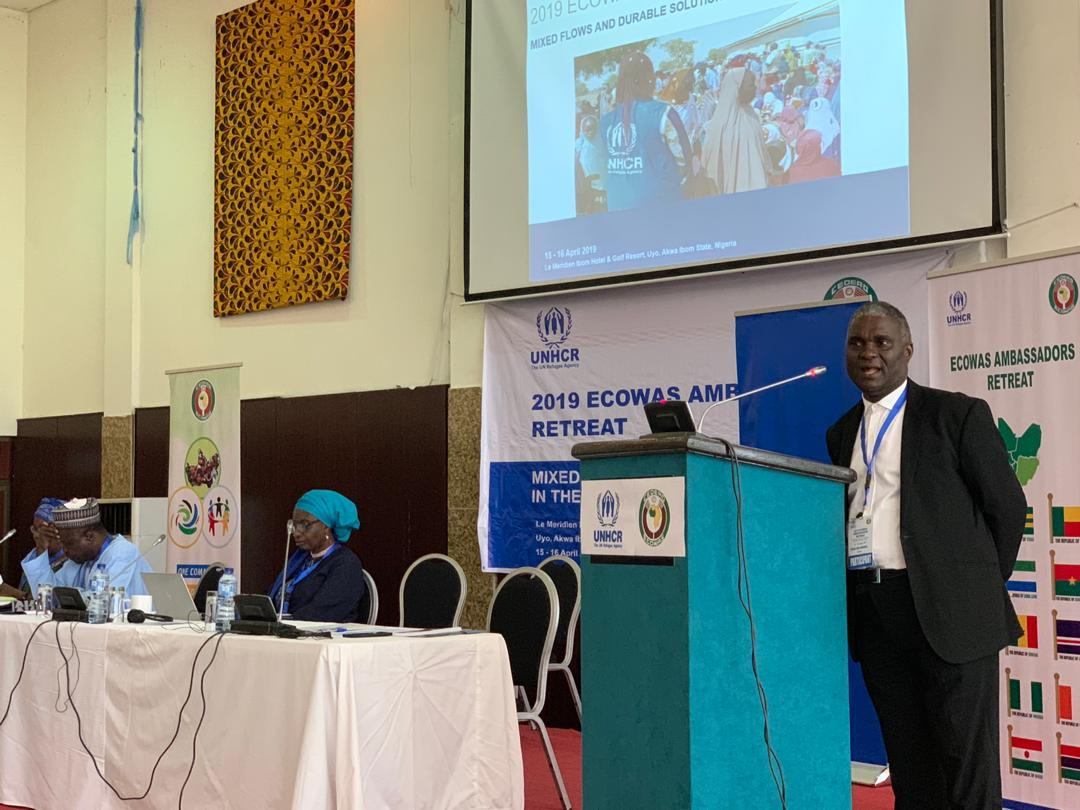 The United Nations High Commissioner for Refugees (UNHCR) Regional Representative, Ms. Liz Ahua has hailed the collaboration between UNHCR and Economic Community of West African States (ECOWAS) in tackling myriads of humanitarian challenges in the sub-region particularly statelessness. She made this remarks at the opening ceremony of joint ECOWAS-UNHCR retreat for ECOWAS Ambassadors in Uyo, April 15, 2019 with theme “Mixed Population flows and durable solutions in the ECOWAS Region”.

Liz Ahua stated that UNHCR’s partnership with ECOWAS which also includes the ECOWAS Commission, ECOWAS Parliament, and ECOWAS Court of Justice has proved very useful and created an avenue for regular stock taking of progress made in shaping a better future. She observed that the retreat is one of the foremost regional initiatives birthed by the partnership between ECOWAS-UNHCR some 12 years ago.

Statelessness which occurs when a person is not considered as a nationality of any country has become a major issue worldwide with about 10 million people said to be stateless. It is estimated that at least 1 million stateless people reside in West Africa and Nigeria adds significantly to this burden with over 750,000 stateless people allegedly residing in the country.

Ahua also noted the myriads of problems bedeviling the sub-region stressing that the UNHCR will continue to work with governments of all concerned countries to mitigate if not eradicate these problems.

“Forcible displacement of people both internally and across borders remains a thorny issue. Within the Lake Chad Basin situation Nigeria, Niger, Chad and Cameroun continue to bear the brunt of the Boko Haram activities. UNHCR, working with the governments of all affected countries, has initiated two protection dialogues, organised respectively in June 2016 and January 2019,” Ahua noted.

Earlier in his welcome address, the Permanent Representative of Nigeria to ECOWAS and Chair, ECOWAS Permanent Representatives’ Committee, Amb. Babatunde Nurudeen called on member states to undertake a thorough appraisal and analysis of all the factors responsible for Mixed Flows in West Africa and come up with durable solutions to the problem.  He also charged member states to put an end to political instability which he described as the major reason fueling migration problems in the West Africa.

The diplomat then admonished stakeholders including UNHCR and ECOWAS to ensure that the retreat is regularly organised so as to properly maximise and X-ray the achievement of previous meetings and chart a new course to tackle emerging problems in the sub-region.

Meanwhile, Legit.ng previously reported that the chief of Army staff, Lt Gen Tukur Buratai, on Thursday, April 11, lauded the doggedness of gallant troops in the defeat of Boko Haram insurgents at Maisadari community in the outskirts of Damaturu, Yobe.

The United Nations High Commissioner for Refugees (UNHCR) representative to Nigeria and Economic Community of West African States (ECOWAS), Antonio Jose Canhandula has advised the Nigerian government on the best way to tackle the spate of insecurity in the country particularly in the north east.

The UN official in an exclusive interview with Olajide Adelana, today, Monday, April 15, at an ECOWAS Ambassadors Retreat in Uyo, Akwa Ibom state, said that the problems of Boko Haram and insecurity in Nigeria are best tackled with increased social and economic inclusion of citizens by the Nigerian government.

Why Kaduna APC launched attacks on Tinubu in Hausa