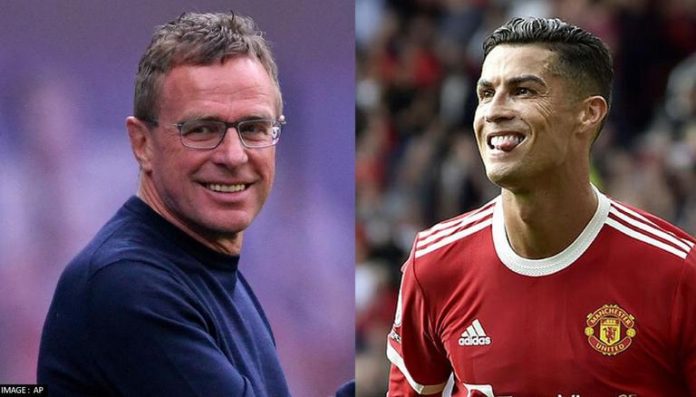 There have been ongoing speculations that United’s talisman Cristiano Ronaldo may be unable to be suited to attacking playing style of Red Devils new boss Ralf Rangnick.

The 63-year-old German has however dismissed such speculations after Ronaldo scored twice to help United secure a 3-2 victory over Arsenal on Thursday evening, taking his tally to 12 goals in 16 appearances this season.

National Daily recalls that the 36-year-old five-time Ballon d’Or winner has previously faced criticism over his lack of pressing during the final months of the reign of United’s former boss Ole Gunnar Solskjaer.

Rangnick meanwhile, appears adamant with the belief that the Portuguese will play an important part during his stint as interim manager at United.

‘You always have to adapt your style or your idea of football to the players you have available, not vice versa,’ Rangnick said when asked about Ronaldo on Friday.

‘Having seen Cristiano yesterday in the second half [against Arsenal], at the age of 36, amazing, top professional, at his age I’ve never seen a player who is still that physically fit.

‘He is still a player who can easily make the difference

‘It’s about how can we develop the whole team, it’s not only about Cristiano.

‘We play in the most competitive league in the world, so we need all the players on board.

‘What I saw from Cristiano yesterday, he’s more than willing to do that, to put his input into the team and the other teammates will have to do the same.’

Meanwhile, Rangnick has also warned United supporters that he will need to time to make changes to the team’s style of play.

‘I think to gain control on games in the future it’s got to do with playing proactively, no matter if we have the ball ourselves or if the other team is in possession,’ said the German.

‘It’s about helping the team to play together, it’s about togetherness, it’s also about team spirit, we saw it yesterday, if we compare the two halves it was completely different. Having these unique fans behind us, this will help the team to gain confidence, we could see it in the second half.

‘It’s not about playing pressing or counter-pressing for pressing sakes, it’s about control, this is the major target.’