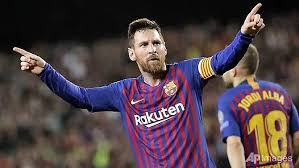 Share this on WhatsApp
Spread the love
Barcelona captain Lionel Messi has criticised the Camp Nou’s treatment of Philippe Coutinho, with whistles once again being directed towards the Brazilian during his side’s 3-0 first-leg victory over Liverpool in the Champions League semi-finals.
Coutinho, who was signed from Liverpool in January 2018, had an underwhelming evening and was withdrawn for Nelson Semedo after the hour mark as he was met with whistles.
Messi, who scored two stunning goals to put Barcelona in control of the tie, came to his teammate’s defence after the full-time whistle and urged the home crowd to get behind him.
ALSO READ: Juventus wants free agent Mata
“This is a time when we have to be more united than ever, both as players and fans,” he said at full-time.
“It is not the time to criticise anyone. The whistles against Coutinho are ugly. We have to be together.”
Substitute Ousmane Dembele missed a great chance to make it 4-0 at the death.
“Four would’ve been better than three but it’s still a very good result,” Messi added.
“3-0 is a very good result. The tie is not decided because we are going to a historical stadium and it will demand a lot, but we are very satisfied.”
The Argentine’s second goal of the night was a stunning free-kick and he was happy with how it went in.
“It went in spectacularly well; I saw the spot and luckily enough, that’s where it went,” said Messi.
Share this on WhatsApp