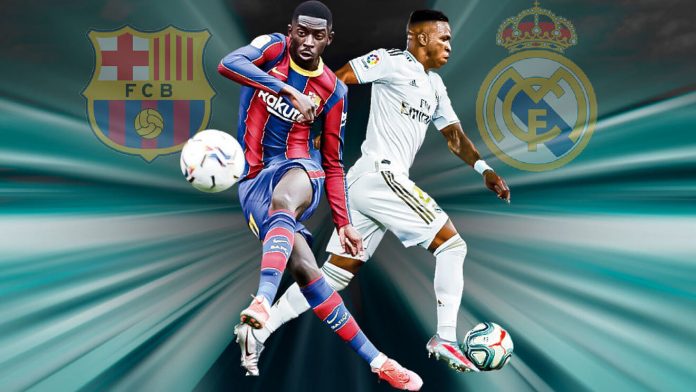 Barcelona on Sunday hosted Real Madrid in the 184th La Liga El Clasico, but failed to close in on their fierce rivals who have now extended their victory to 77 while Barca remain with their 72 wins with 35 draws.

The victory on Sunday translates the fact that Real Madrid have simply enjoyed a cut above FC Barcelona this year.

The Santiago Bernabeu side who opened the scoring in the 32nd minute went into the Camp Nou and showed their class in a 2-1 El Clasico win.

Carlo Ancelotti and his men pushed themselves to the summit of the La Liga table after holding off a Barcelona team that struggled to create chances as they remain in 9th position with five points behind their opponents.

Though Barcelona had started strong with Ansu Fati leading the charge and would have drawn the first blood, but only for the U.S. international Sergino Dest who had a goal at his mercy skied his attempt in the 25th minute which left the door open for Real Madrid as they began to exert more pressure through the runs of Vinicius Junior, whom Barcelona struggled to contain.

The Brazil young sensation Vinicius eventually started a counterattack that led to Real Madrid’s opener in the 32nd minute when he fed his compatriot Rodrygo, who then slotted a through ball into the space created by the marauding run of David Alaba from his center back position as the Austrian graciously applied a striker’s finish past Barcelona goalkeeper Marc Andre Ter Stegen.

Ronald Koeman and Barcelona have tried to respond quickly when a host of substitution which included attacking midfielder Philippe Coutinho, forwards Sergio Aguero and Luuk de Jong were introduced, but with minimal impact.

Rather it was Real Madrid that found a way to seal the match in stoppage time when Lucas Vasquez put away a rebound after a shot from Real Madrid sub Marco Asensio was saved by Ter Stegen.

It was a sad one for Barcelona fans as Aguero’s late goal moments later on from a cross by Dest was too little too late and the final whistle came seconds later.

Meanwhile, National Daily understands that a group of angry Barcelona fans had surrounded manager Ronald Koeman’s car as he attempted to leave the Nou Camp after the game.

There is no doubt that Barca fans were desperate to get one over their oldrivals in the first full capacity match between the sides since post pandemic and had come into El Clasico on Sunday with renewed hope of finally having one over Madrid after failing to win in their last four meetings.

Mostly also, the Catalan giants have consecutively won their last two games against Valencia and Dinamo Kiev, but they were dealt a blow after yet another defeat in the hands of Real Madrid.

And though a vast majority of Barcelona fans had passionately supported their team with a stream of constant songs in a deafening atmosphere, but things suddenly turned ugly outside the ground when Koeman was spotted leaving the stadium in his Audi.

One of the fans could be heard yelling “Get out now,” while another added “Get to the street!”

However, Koeman speaking after the game had expressed his disappointment following the sad defeat while hoping that Barca will turn the corner quickly:

“I am disappointed with the result but the team tried until the last second. We didn’t create many clear opportunities. It was an even match but in the end the small details proved key.

“It is difficult to find positives from losing at home to Madrid, but I liked the attitude of the players and the fans.

“There is another game on Wednesday, the season is very long so we will keep fighting.”