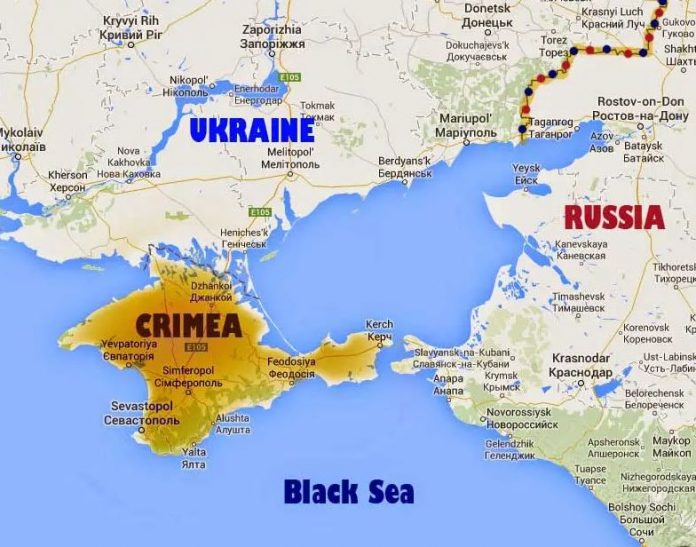 Share this on WhatsApp
Spread the love
If Ukraine continues to deal such great losses to Russia, is it at all likely.

Consider this question strategically. Suppose Ukraine formally ceded the Crimea and the Donbas to Russia in exchange for Russia agreeing to formally recognize Ukraine’s sovereignty and promise never to try to invade Ukraine again. What then?

Putin would build up his forces and invade Ukraine again as soon as he’d resupplied his forces. Having Crimea enables him to attack from the south, Donbas from the east, Belarus from the north.

Since 2014 Putin has turned the Crimea into a militarized zone full of arms, soldiers, materiel. From here he can hope to cut off Ukraine’s access to the sea and make it a landlocked nation much harder to resupply and to defend itself from Putin.

If Putin hadn’t militarized Crimea it might be slightly less crucial for Ukraine to retake it. But he did and his use of Crimea in this invasion shows just how effective it was to have as a Russian dagger jammed into Ukraine’s belly.

The real question is whether the West, led by America, is willing to commit to the cost and problems of supplying Ukraine the next-up level of weaponry needed to enable it to retake the Crimea and the Donbas.

Are we hoping for some kind of negotiated settlement with a country that has repeatedly shown that its word is worthless? That has proven that “land for peace” works the same as it did with Hitler?

One thing Westerners may not know is that since Putin started his war of conquest against Ukraine in 2014, the Crimea’s economy has tanked, and the ethnic Russians who were are for the annexation are not anywhere near as eager for it now. They want their bustling tourist economy back; they thought they’d get it with the Kremlin’s little Napolean, and they didn’t. Also, living in a police state full of secret police really fails to fill people’s fun buckets.

Putin really destroys everything he touches.

Hoping for a negotiated settlement with Putin is indulging in wishful thinking. Hoping to trade land for peace—especially someone else’s land for your peace—is Neville Chamberlain 2.0.

Fearing leaving Putin cornered is fearing victory, which we’ll really achieve when his own circle of cronies realizes he’s poisoning their wells and they arrange for him to have a little accident—like an aneurysm. That would look good.

If all you want is peace, we need to support Ukraine achieving victory, period. I didn’t believe they could do it before Putin launched this invasion. But I didn’t realize how much the Ukainians had prepared. How good the comedian turned Peresident would do his job. How lousy a war planner Putin was. How decrepit his giant military was. How effective an outnumbered military with small high tech weaponry could rip into Russia’s Big Bad Army.