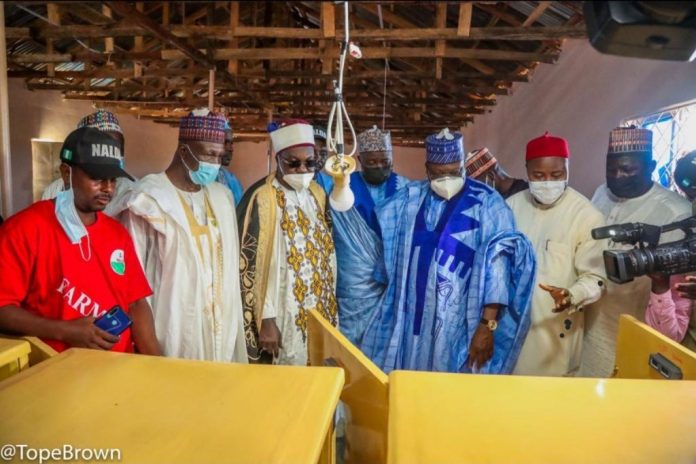 Ikonne made this known on Monday in Abuja.

He also said the poultry farm estate, sitting on a 20ha land in Gusamu community of Jakusko Local Council, will also generate N8.160 million monthly from sale of day-old chicks.

He said President Muhammadu Buhari mandated NALDA to make agriculture attractive for our youth to produce what we eat and for Nigerians to eat what we produce”.

Ikonne said the farm estate which began production immediately is expected to generate N1.1 million daily from sales of eggs alone and N400 million annually for the farmers.

“This farm has a capacity of generating 850 crates of eggs daily and generating N1.1 million daily from the sales of the eggs only.

“And these eggs will also be incubated as we have an incubation centre here in order to produce day-old chicks that will be sent to other poultry houses across the country. Annually, we are expecting to have not less than N400 million generated from this farm”, Ikonne noted.

He explained that the incubation centre will produce the parent stock which will lay eggs for the production of day old noilers for sales, with the production capacity of 250,000 annually.

While the 30,000 birds will be used for egg and meat production for the 30 benefiting farmers.

“The youths from this immediate community are the first set of beneficiaries which we believe will engage them meaningfully as they will be making their money from this centre.

Speaking, Senate President Ahmad Lawan, while commissioning the project, over the weekend, commended President Muhammadu Buhari and NALDA for placing Gusamu community on the world map and creating jobs for youths.

He said the farm estate would produce chicks for sales and distribution across the country.

“So it means it is a special bird, anyone who wants our type of chicks will get it from here, it means there will be a lot of trading and marketing between this Gasamu farm Centre and all parts of Nigeria.

The Senate President expressed optimism that the farm estate will project the name of the community, and cause the establishment of poultries around the local government and the state.

“Because of this project, Gasamu will be prominently shown in the Nigerian map, and this is something that is very important to us as a community.

“That means we are going to have poultry farms coming up across this zone, particularly in Jakusko local government.

“So, I believe that very soon, we will see an increase in the number of poultry farms in this particular zone. This is one of the immediate benefits and I will urge our people not to lose this opportunity”, he noted.

Lawan appealed to NALDA to increase the production capacity of the poultry, stating that the 250,000 chicks annually may not be enough for the community alone.

“Presently 30 youths will be engaged to manage the farm, this is only the direct employment, if you look at the indirect opportunities when you establish poultry farms across this zone”, Lawan added