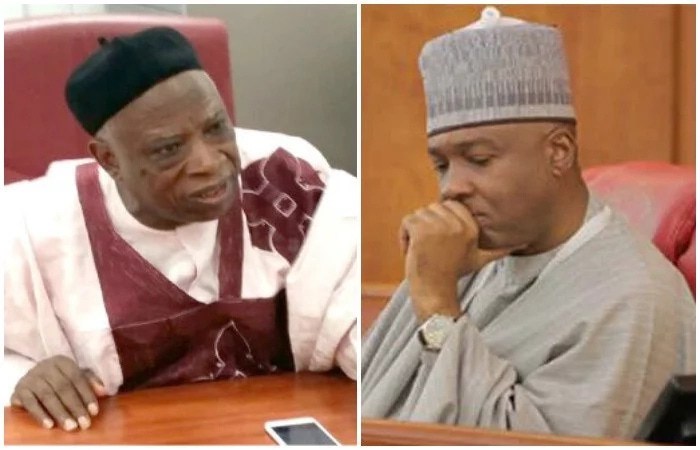 Senate President Bukola Saraki has finally replied Senator Abdullahi Adamu over what he described as the ‘constant attack’ on him, calling the Nasarawa senator a desperate liar.

Adamu had accused Saraki of “playing a game of betrayal” in the All Progressives Congress (APC). He was also alleged to have said Saraki referred to Dino Melaye, senator representing Kogi west, as a clown.

Responding to his allegations in a statement by Yusuph Olaniyonu, his spokesman, Saraki described Adamu as “deceptive, manipulative and desperate liar” whom he says should not be relied upon.

“I have deliberately ignored the antics of Senator Abdullahi Adamu, especially his constant media attack on me and the senate since the Economic and Financial Crimes Commission (EFCC) dusted his file on alleged case of corruption and also went ahead to arraign his son in court,” the statement read.

“So far, I had refrained from responding in kind out of respect for his age. However, it seems he has misread my maturity and respect for docility. He feels the best way to play his self-survival game and ingratiate himself to the government in order to save his skin is for him to be seen to be fighting Saraki, even if that would require him to tell brazen lies and peddle mischief in his old age.

“However, I feel his latest statement in an interview with a national newspaper deserves a reaction from me. First, I could not have referred to my colleague, Senator Dino Melaye as a clown, knowing that from available records, Senator Melaye has so far outshined and has performed better than Senator Abdullahi in terms of the number of bills sponsored, motion raised and contributions to debate on the floor.

“Well, since Senator Abdullahi Adamu became the attack dog of the executive in the senate, using language unbecoming of a man of his age against me and other colleagues who he perceived he needs to disparage to reassure his handlers in the presidency, I have realised that he simply deserve our sympathies. I am sure those he thinks he is working for, know he is a man who is only useful for the present moment.”

“He only says what suits him as the occasion demands.. I specifically recall some statements he made on the president and his administration during an official trip we made together to Morocco in March last year. At the appropriate time, we will give more details,” Saraki said.

“Senator Abdullahi’s statements should not be relied upon. He is a deceitful fellow who says what suits the situation that he finds himself. So, it is now he knows the senate has a bad leadership after three years?”

Share this on WhatsApp
Related Topics:Senate President Bukola SarakiSenator Abdullahi Adamu
Up Next