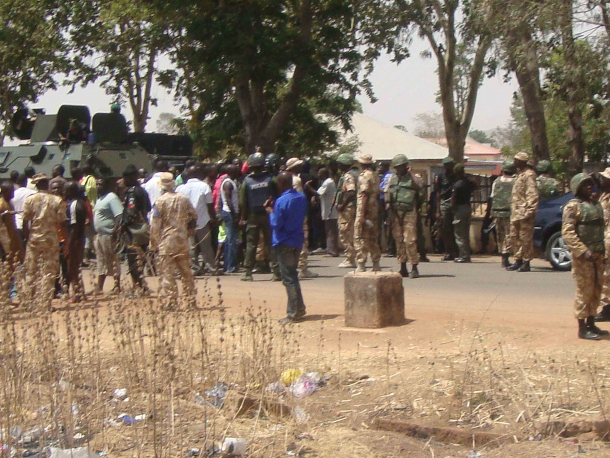 Share this on WhatsApp
Spread the love
By Kingsley Chukwuka Jos
Youths in their hundreds went berserk over the weekend and attacked the Special Task Force (STF) checkpoint and destroyed three vehicles parked at the task-force Sector Nine Unit in Riyom Local Government Area of Plateau State.
Giving reasons for the attack, the spokesperson for the taskforce, Captain Umar Adams, said two men from Sopp Community in Riyom LGA, volunteered to assist the STF in reviving an abandoned well located in the said community, but lost their lives in the process.
It was learnt that when the villagers  received the news of the unfortunate incident, the youths in the community went on rampage accusing the STF of murder.
Capt Umar explained, “We wanted to revive the abandoned well which was dugged in 1985. So, one of the natives said he could assist us to excavate the waste in the well, and said that we have to pay him, so we agreed.
ALSO SEE: Buhari reiterates Nigeria’s commitment to international trade

“However, when he entered the well, he did not come out and another native said he was an expert and entered to find out why the other person did not come out; he also did not come out.
“The youths in the community were alarmed and went on rampage accusing the soldiers of forcing the men into well that led to their death,” he reiterated.
Capt Umar said with the instruction of the Sector Nine Commander, the soldiers maintained calm refusing to fire at the rampaging youths.
“We are here to maintain peace so we cannot fire at them. The soldiers received instruction not to shoot at the aggrieved youths so we stood and watched them destroy our properties because properties can be replaced but firing at them, the lives that would be lost cannot be replace.
“You know we have been arresting criminals in that axis for the past one month especially in Sopp community. Anytime we are going on patrol, they have an informant that will always tell them that the military is coming and then they will flee.
“So, the criminals in Sopp seems to have been waiting for this type of opportunity to attack our soldiers and destroy our road blocks. They rampaging youths blocked the road, halting vehicular movement”.
The spokesman for the task-force said however, normalcy has returned to the area and the community has written an apology letter to the STF.
Share this on WhatsApp
Related Topics:DeathPlateau StateSpecial Task Force (STF) checkpointYouth
Up Next

We have 37 available job opportunities for Nigerians – UN