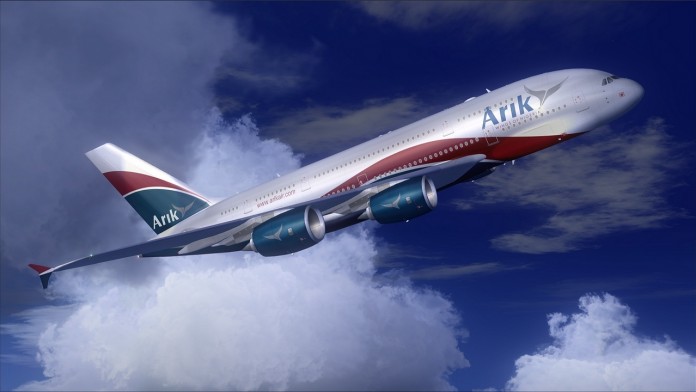 …as passengers rush other airlines

Disgruntled workers under the aegis of the Air Transport Services Senior Staff Association of Nigeria(ATSSSAN) and the National Union of Air Transport Employees(NUATE) have shut down Arik Air’s operations over N12.5 billion debt owed the Federal Airports Authority of Nigeria(FAAN).

A situation which started in the early hours of today, Wednesday 20th April, has disorganized some passengers who bought tickets to fly Arik to their various destinations but are now stranded at the General Aviation Terminal (GAT) also known as terminal 1.

The angry workers were singing solidarity songs, carrying placards with various inscriptions: “If Arik Air alone is owing the Federal Airports Authority of Nigeria(FAAN) N12.5 billion, how do they want FAAN to survive?” “Arik pay your debt, enough is enough” “Arik Air Must pay its debt to FAAN for peace to reign” “Arik Pay Your 12.4billion Debt! FAAN can no longer pay salaries, pension, staff claims due to your debt!” and many others.

According to the unions, the decision to shutdown the airline was prompted after all the negotiation processes between the airline and FAAN authority failed.

As the picketing continues, stranded passengers affected by the fracas, have flooded the counters of other airlines to buy tickets to get to their destinations.

Meanwhile, all the Arik Air counters at Terminal 1 for buying tickets and check-in are currently under lock and key.

National Daily gathered that passengers, who were taken unawares, have started agitating for a refund of their ticket fares.

One of the passengers said: “the Arik people are not even here to give us any official word on what to do, some people who have not committed have gone to other airlines and should be well on their way but this airline just abandoned us here apart from their hiding staff here and there no one has come to say what the way forward for us is”.

Commenting on the development, the President, ATSSSAN, Comrade Benjamin Okewu stated that the unions and FAAN workers had not embarked on industrial action against the airline, but only withdrew the services they render to the airline as a result of the massive debts.

He added that though other airlines owe the agency, but that other airlines were servicing their debts through the reconciliation committee set up by the government. according to him, the blockade will continue tomorrow until Arik pays its debts and reconciles its account.

Also speaking, the Acting General Secretary, NUATE, Comrade Olayinka Abioye said that, ’We are engaged in picketing exercise against Arik Air over its indebtedness to FAAN in the sum of N12.5bilon.”

Abioye hinted that there a lot of pressure on the unions as the picketing was going on from the ‘powers that be” to restore services to the airline.

He posited that aviation unions did not stop the airline from operating, but only withdrew the services FAAN renders it. He argued that Arik Air did not demonstrate any eagerness to service its debts, adding that FAAN required money to upgrade its facilities at the various airport terminals, which, according to him, even Arik and other domestic airlines have been complaining about.

According to him, “These are the people that go around complaining that our infrastructure are not upgraded. How can they be upgraded when an individual entity owes us N12.5 billion? We will only leave here if the airline pays at least N2 billion today as part of its debts.”

He made the confirmation in an online statement, titled, “FAAN Union Disrupts Arik Air’s Operations At Lagos Airport”.

According to him, “The action by the workers’ union is connected to a long-standing and unsubstantiated claim by the Federal Airports Authority of Nigeria (FAAN) of spurious indebtedness of the airline to the agency which is now before a Federal High Court in Lagos at the instance of FAAN.”

He stated that for several months, the management of Arik Air and FAAN have been meeting to reconcile payment accounts between the two institutions, adding that the reconciliation process was still ongoing until the latest actions by the union.

In his words, “This is not the first time that FAAN workers’ union will be taking the laws into their hands by disrupting operations of Arik Air. The current situation is deeply out of control of Arik Air and the management of the airline has been compelled to suspend all domestic operations for today. This will remain in force until such a time the unfortunate situation is resolved,” Banji said.

He apologised for the inconveniences the FAAN workers’ union action may have caused its esteemed passengers, adding that the airline lives to serve the needs of the people of the great nation Nigeria.
Adebanji added that the airline look forward to working collaboratively with FAAN and other aviation agencies to resolve the impasse and return to operations. 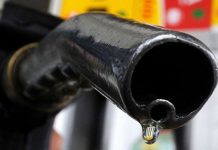