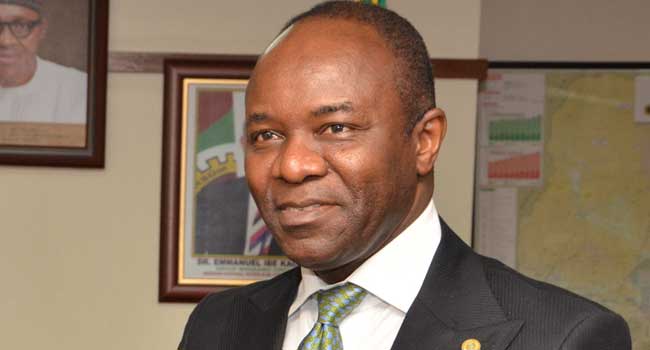 Earlier in the week, he performed a similar exercise at Escravos for the Warri Refining Company, which now feeds the refinery.

The Minister said the crude line, which supplies crude feed-in from the Bonny Export Terminal had been out of use for the past seven years, thereby rendering the refinery comatose.

He informed that refining at the PHRC and WRC are ongoing, producing some 12 million litres of premium motor spirit, otherwise called fuel.

He apologized to Nigerians for the current fuel agony; stating that they scarcity was easing.

Kachikwu informed that he was happy to see the Port Harcourt and Warri refineries working at the same time; adding that the Kaduna Refinery was currently receiving crude, and would soon begin production.

The Minister of State Petroleum Resources, however, said with all the nation’s refineries working, they are only currently able to produce 12 million litres of PMS, which was still lower than the national consumption figure of 45 million litres.

He informed that currently the refineries were undergoing upgrade, to bring their refining capacity to about 60%; but said there was need to bring them up to 90% capacity required to attract foreign investors to come in.

He said the NNPC did not have all the funds to carry out the upgrade; which is why the corporation is sourcing for foreign investors to fund the refineries and take up the capacity to above 90%.

He said fuel importation would soon be reduced drastically, when the three refineries would have been upgraded to operate at 90% capacity.

He also denied reports that the expected foreign investors were coming to take-over the refineries; but would rather come in with funding, and would operate as ‘technical partners’ to the refineries.

According to him, Nigerians would still be running the refineries; saying, “only Nigerians can fix their own refineries.”

“We’re not selling the refineries, nor handing them over to foreigners; but what we’re doing is to get them to bring in funds with which to run the refineries, Kachikwu said.
He compared the situation to Cote d’Ivoire, a neighbouring West African country whose refinery, built at about the same time with Nigeria’s, but was presently doing 100% capacity.