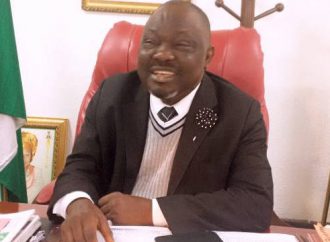 Share this on WhatsApp
From OSEMWENGIE BEN OGBEMUDIA, Benin City
The Speaker of Edo State House of Assembly, Right Honourable  Justin Okonoboh, narrowly escaped Impeachment on Monday over what some lawmakers described as lack of leadership style.
While the pandemonium raged in the House. Operatives   of the Department of State Security (DSS) were deployed to the premises of the House of Assembly to prevent breakdown of law and order over the aborted plot to impeach Speaker Justin Okonoboh.
Two vehicles of the DSS operatives were stationed outside the Assembly premises this Monday morning when our Reporter visited the House.
The lawmakers were supposed to resume plenary on Monday after two months holiday but a letter issued last night said the planned plenary resumption has been postponed.
Some workers at the Assembly, who were seen talking in different gatherings, confirmed they heard rumours of the impeachment plan against Speaker Okonoboh.
ALSO SEE: Tax payers’ money at work in Lagos – Ambode
A lawmaker who spoke in confidence dismissed the impeachment plot but said there were some differences they were sorting out. He insisted that there were talks among the lawmakers to resolve all issues.
Another source said the lawmakers persuaded the Speaker to postpone plenary to avoid them receiving Commissioners nominee list from Governor Godwin Obaseki.
When contacted for comments, Speaker Okonoboh said the impeachment plot against him was a daily rumour he hears from time to time.
Speaker Okonoboh said there was no impeachment plot in the Assembly and added that he was yet to receive the Commissioners’ list.
Share this on WhatsApp