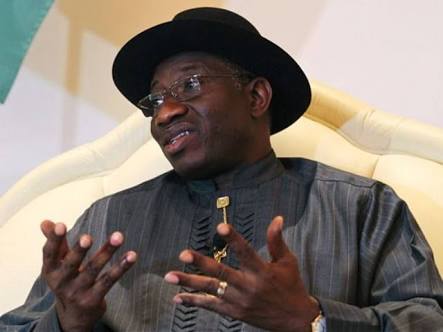 Share this on WhatsApp
Spread the love
The House of Representatives is ready to summon former President Goodluck Jonathan to explain his role in the controversial award of OPL 245 oil block licence.
The House committee on justice said it found the latest allegations against Mr. Jonathan too compelling to ignore.
Shell and ENI paid $1.1 billion into Nigeria’s government account with JP Morgan for the oil block, while about $200 million was paid by Shell as signature bonus.
A large slice of the fund ended up in private accounts with about $801million directly going into the account of ex-Petrol Minister Dan Etete convicted for money laundering in France.
A sum is also believed to have gone to Mr. Jonathan and officials that served under him including Mohammed Adoke, the then attorney general.
Razak Atunwa, committee chairman who heads an ad-hoc panel investigating the $1.3 billion Malabu oil deal, said efforts have commenced towards summoning the former president to testify.
“I can confirm that the former president is now on our radar following new details that were uncovered in latest news reports about the Malabu scandal,” Premium Times quoted Atunwa as saying.
Italian prosecutors involved in the investigation because of ENI,  quotin Ednan Agaev, a Russian middleman who negotiated the transfer of the oil block to Shell and Eni, said Etete intended to bribe officials with as much as $400 million if the deal clicked.
If Mr. Etete actually paid out such an amount in bribes to Nigerian officials, “Agaev stated that he would think President Goodluck Jonathan got at least $200 million of this money,” BuzzFeed quoted an excerpt of FBI submissions to Italian authorities as saying.
The revelations were made when the FBI interviewed Agaev, who, according to prosecutors, met Jonathan on more than one occasion in Nigeria during the OPL 245 negotiations.
ALSO SEE: Court fixes May 18 for Malabu petition against FG
Representing Etete in the negotiation, Agaey said the former petroleum minister told him of the $400 million bribe to Nigerian politicians when he approached him for his payment.
The Russian also repeated the claim in a follow-up interview with Italian prosecutors, led by Fabio De Pasquale in Milan.
“I said that if it’s true, that he paid, he had to pay 400 million, I assume that at least 200 went to Goodluck (Jonathan).”
“I heard from Chief (Etete), he claims that he had to pay 400 million, so, if this is true, if he paid 400 million, then most probably the President, as the biggest boss, took at least the half of it,” BuzzFeed wrote, quoting documents prepared by Italian prosecutors.
The House committee last year began a new round of inquiry into the controversies surrounding the OPL 245 since its lease was first awarded in 1998.
Share this on WhatsApp