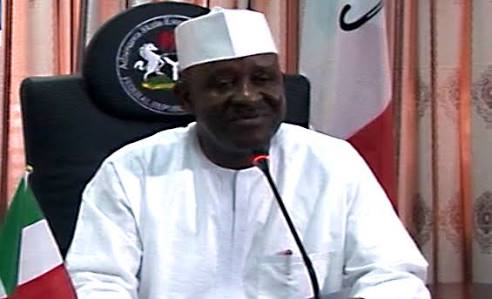 Share this on WhatsApp
Former Adamawa governor, Bala Ngilari, presented  a fake letter to get bail from prison after a court convicted him of corruption and sentenced to five year’s imprisonment.
The letter confirming Ngilari’s bad health situation was the major one he presented to a Yola High Court and upon which the court granted him bail, an official said.
Justice Nathan Musa of the Yola High Court on Monday granted bail to Mr. Ngilari, currently in the prison for a five-year jail sentence.
The former governor has appealed against his conviction.
Peter Tenkwa, the Controller of Adamawa Command of the Nigerian Prison Service, NPS, told journalists on Monday in Yola that he was not aware of the letter and had communicated to the prison headquarters.
He said the headquarters directed him to issue a query to officials involved in the matter, including the Deputy Controller of Yola Prison, Abubakar Abaka, and a Superintendent of Prisons, John Bukar, in charge of health.
“Nigeria Prison Service, as I stated, knows nothing about this letter; whoever wrote that letter is on his own. I have been directed to query the officers involved.”
Mr. Tenkwa said that all he knew was that he got a letter dated March 23 from Adamawa
Ministry of Justice on health facilities in Yola Prison where Mr. Ngilari was remanded and that after accessing the facilities, he replied to the letter, informing the ministry that the facilities were okay.
“We have enough medical facilities to handle high profile inmates like Ngilari; we even received some supply of drugs on Friday,” Tenkwa said.
Mr. Tenkwa, however, said that he had yet to get a release order from the court regarding Ngilari’s bail, adding that whenever he received it, he would contact the service’ legal department before acting on it.
Also commenting on the issue, the Attorney-General of Adamawa and Commissioner for Justice, Bala Sanga, said the bail granted Mr. Ngilari was a disturbing development.
“The chamber of attorney general is very worried and disturbed about this granting of bail pending appeal to our former governor; this is a legal remedy that is very rarely granted.”
Mr. Sanga said that he was more disturbed that the letter acted on in granting the bail was not exhibited with the appellant’s application nor attached to the documents.
“Technically what this means is that the letter was not even before the court.
“So, the court, in my opinion, has no business relying on a document that was not before it to arrive at a decision.”
Mr. Sanga said that the purported letter claiming that Ngilari was facing serious health problem was dated March 23, while the letter to the ministry from the prison service, which confirmed that the authorities had the necessary facilities to handle Mr. Ngilari, was dated March 24.
“This is very scandalous, if indeed the prison says it did not issue the letter.
“We intend not to file a complaint against whoever wrote that letter but to refer the matter to the police for prosecution because the court relied significantly on that letter to grant the bail,” Mr. Sanga said.
Mr. Sanga said that the disease was not contagious hence the bail was unnecessary.
Justice Musa, on March 6, sentenced Mr. Ngilari to five years in prison, without an option of fine, for violating the Public Procurement Act in the award of contract for the procurement of 25 vehicles.
Mr. Ngilari was given an option to select a prison of his choice to serve the term.
Share this on WhatsApp