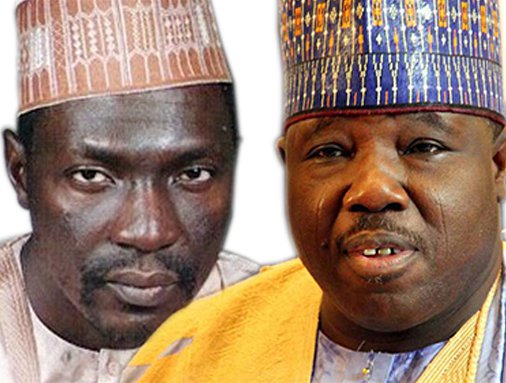 The controversial National Chairman of the Peoples Democratic Party (PDP), Senator Ali Modu Sherriff, has, in the interim, paralyzed the party, culminating into temporal obstruction of activities relating to elections and mass mobilization.
National Daily inquiry revealed that the PDP crisis came to a stalemate when the Court of Appeal, penultimate week, affirmed Sherriff as the party’s chairman, a decision that is currently challenged at the Supreme Court by the PDP faction led by Senator Ahmed Makarfi.
Apparently, the court’s judgment legalized the leadership of Sherriff even when majority PDP give legitimacy to Makarfi leadership. Thus, while Sherriff remains the de jure chairman, Makarfi is recognized as the de facto chairman. However, the configuration of the power struggle shows that since the federal institution assigned with elections responsibilities, and the associated security agencies, recognize and identify with Sherriff and his followers, Makarfi and his followers have become comatose in promoting the interests of PDP members.
National Daily inquiry further revealed that the irony of the power struggle in the PDP is that the soul of the party is with Makarfi but the legal authority resides with Sherriff. This has placed the PDP at crossroads of recovery from the crisis that is gradually leading to exodus of PDP members to a likely new political party or an entirely new alliances.
Thus, there emerging symptoms that Sherriff has thrown the PDP into crippling depth of frustration.
This compendium generated apprehension of a season of political inertia that could relegate notable PDP members into oblivion, particularly, during the local government polls and by-elections across the states; culminating into a new thinking in the party that the only remedy is to seek a temporary alternative platform till the Supreme Court makes a pronouncement on the pending suit.
ALSO SEE: Jonathan-PDP peace process collapses
Meanwhile, Prince Dayo Adeyeye, National Publicity Secretary of PDP National Caretaker Committee, refuted reports of official directive to PDP members to contest elections on alternative party platforms.
Adeyeye, in a statement, articulated that in view of the misconception and unease the issue generated, PDP leaders were constrained to make the following clarification:-
“The National Caretaker Committee is working with all the Organs of the Party, the BoT, the National Caucus, NEC, PDP Governors Forum, PDP State Chairmen Forum, PDP Ministers Forum, the Youths and Women Groups and other relevant bodies to pursue the Appeal filed at the Supreme Court to its logical conclusion.”
He maintained that they have a good case and the ground of Appeal is solid. “We believe ultimately that justice will be served on the leadership issues in our Party and we are also confident that the Judiciary will continue to remain independent, unbiased and neutral,” he remarked.
“However, while we await the verdict of the Supreme Court, we are confronted with pending local government, National and State Assembly by-elections in many states of the federation. Since the Platform of our great party, the PDP is currently in dispute, we recognize the anxiety of our patriotic and loyal members to avoid a repeat of the Edo and Ondo Gubernatorial Elections experience where Senator Ali Modu Sheriff and his co travelers tried to scuttle the chances of our members by fielding APC lackeys and surrogates as alternative candidates in other to disturb, distract and dissipate the energy and concentration of our genuine candidates in those elections. It is indisputable that this was the main reason for our defeat particularly in the Ondo Governorship Election. That was why we deliberately decided not to run parallel congresses in Anambra State in order not to subject our Party members in that State to the agony of a disputed platform. .
Adeyeye also observed that Sheriff and his cohorts have been creating factional chapters in different states of the federation in order to compromise PDP chances in the Local Government Elections.
Acknowledging the depth of frustration, Adeyeye declared: “In the circumstances and with no hope of the Ali Modu Sheriff problem abating before the Supreme Court judgement, we are left with no choice than to consider ways by which our members will not be disenfranchised in these elections. However, our position is not to choose a platform for any state where true PDP candidates are denied the opportunity to stand for the elections. State Chapters are allowed to take any decision they consider appropriate.”
PV: 0 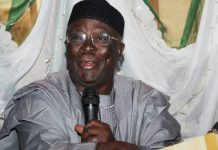