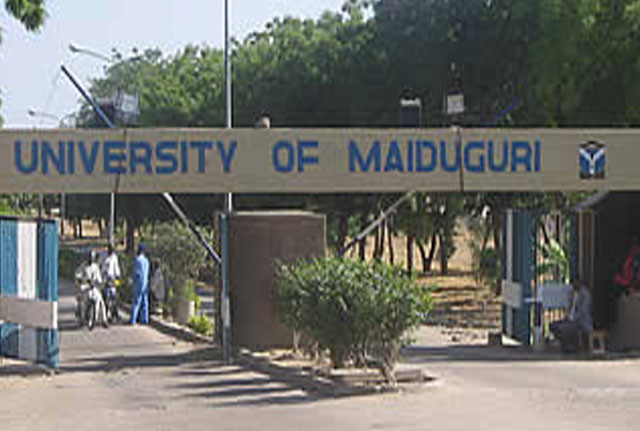 IN preparation for the coming combined convocation of the University of Maiduguri, UNIMAID, the Vice- Chancellor of the institution, Professor Ibrahim Njodi, has taken the former President of Nigeria Olusegun Obasanjo on a tour of the main campus of the university on Bama Road to see latest developments.

Obasanjo, who was in company of some of his allies, was taken round completed and some uncompleted projects embarked upon by the present management headed by Professor Njodi to see things for himself and advise on what other things needed be done.

The former president who later interacted with the Unimaid Radio run by the Mass Communication Department said that he was in Maiduguri at the instance of the Vice-Chancellor who wanted him to be present at the convocation next month.

He said that he was in Maiduguri now to tell the whole world that it is a safe place for them to fly in and see things for himself adding that he will not be able to attend the pending convocation for the 16th of April this year but hopes that his visit will send the right signal to local and foreign leaders that they can attend the convocation as security has improved.

The former President noted that Professor Njodi has not only transformed the institution into a modern university but has equally provided “conducive and standard learning environment for our children and grand children to acquire knowledge and character.”

While going round the campus the former president also said the buildings and entrepreneurship centre constructed and established by the university will actually stand the test of time with the quality and standards of products they were executing.

According to him, the students are lucky to have an entrepreneur center within the campus which is a link with their academic studies before graduation, they can equally be business men and women or enterprising ceo’s

The former President was also hosted to a dinner by the University after paying homage to the Shehu of Borno, Alhaji Abubakar Garbai El Kanemi.

Share this on WhatsApp
Related Topics:former President of Nigeria Olusegun ObasanjoProfessor Ibrahim NjodiUniversity of Maiduguri (UNIMAID)
Up Next

I’ve decided not to talk on situation in CAN — Oritsejafor