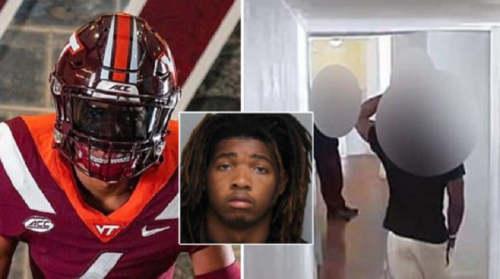 Feeling cheated by a cross-dresser of a date, a Nigerian-American punched and stomped his new catch to death in Blacksburg May 31.

Court records revealed the dead lover had all his face bone smashed, some teeth missing at the end of the domestic violence.

Ismemen David Etute is now arrested and will be charged with secondary murder.

His tragic lover, Jerry Paul Smith, a restaurant manager, was 22 years older than Ismemen, a linebacker in American football at Virginia Tech.

Smith posed as Angie on Tinder when he hooked up with the Nigerian American. They had oral sex the first date.

According to a report by Daily Mail, Smith’s profile indicated he was a woman named ‘Angie,’ Etute’s attorney James Turk said.

The sportsman knew the truth on the second date at Smith’s apartment on May 31, and Ismemen hit him in the face five times, according to court records.

Smith fell to the ground. Etute, still stewing, punched him five more times before stomping on him till he died.

Police discovered Smith’s body on June 1 in his apartment.

The autopsy report has revealed blunt force trauma to the head as the cause of Smith’s death.

During a bond hearing last week, the Montgomery County General District Court was told Smith had multiple social media accounts where he posed as a woman named “Angie.

“Nobody deserves to die, but I don’t mind saying, don’t pretend you are something that you are not,” his attorney, James Turk, told reporters outside of court on Wednesday.

“Don’t target or lure anyone under that perception. That’s just wrong.”

The court has set September 23, 2021 as the date for Etute’s preliminary hearing on the murder charge.