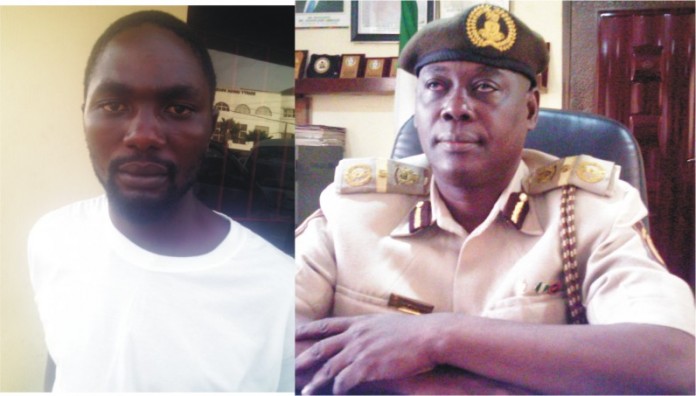 A Lebanese, who allegedly raped and impregnated his house help in Lagos, might escape justice if the position of NAPTIP is anything to go by.

Hassan Hussien Ali,50, was said to have raped the girl a day after she resumed work in his house.

The 17-year old girl, Rhoda Timothy, was said to have gone to Ali, a chef, on that fateful day to collect money to buy some foodstuff in the house, when the man dragged her into his room and raped her.

Unfortunately, Rhoda was said to have missed her monthly cycle (menstruation) as a result of the rape. When she told the Labanese about as soon as she discovered it, the man dragged her again into his room for another bout of sex – rape – the second time.
Rhoda was brought to Lagos from Jos last year by a cousin of hers for domestic work.

Having confirmed she was pregnant, Hassan took her to a chemist shop around Allen Avenue where he procured some drugs for her to terminate the pregnancy. Unfortunately, the drugs failed. He procured a second dose of drugs for her which also failed.

In order to do away with the house help whom she paid N10, 000 monthly, he swiftly paid N19, 000 and terminated the contract, leaving the girl in utter confusion.

But with the help of relatives, she weathered the storm until the matter was reported to Immigration by a concerned citizen.

Hassan was promptly arrested by immigration and handed over to NAPTIP for investigation.

A cousin of Rhoda, Joseph Bulus, who spoke to National Daily said that the head of NAPTIP, a government agency in charge of human trafficking in the country,has not been fair with the treatment of the girls in their custody and the family members as well.

He alleged that since Rhoda has been with them until she gave birth to a baby girl last Monday at the Cottage Hospital located at the Police College in Ikeja, the NAPTIP boss, Famakin, has held Rhoda incommunicado. Before she gave birth, Rhoda’s brother said Famakin threatened him several times, asking me to rent a house for the girl to stay.

Narrating what he knew about Rhoda’s rape and pregnancy, Bulus said, “I got to know about the pregnancy after seven months because after the Labanese sacked her, my elder brother got her another job where she worked for five months before she discontinued due to the pregnancy.”

He said he took her for a test in January and she was confirmed pregnant. We confronted the Labanese who denied that he neither raped nor impregnated her.

With the help of a concerned neighbour, the matter was reported to the Nigeria Immigration Service (NIS) and Hassan was promptly arrested on the 9th of February, 2016.

“I am not satisfied with the way NAPTIP is handling the matter. They have released the Labanese while they held my cousin incommunicado,” he said,

He added the Lebanese can flee the country with the way the matter is being handled by NAPTIP which suggested being compromised.

“They want to compel me to take her away from their custody which I have refused. There is no arrangement with Lebanese to take care of her until she puts to bed.”

However, when National Daily visited NAPTIP’s office at Ikeja, the men at the gate said Famakin cannot see our reporter, claiming that he has closed for the day.

When called on phone, he said, “All I can tell you is that the girl has put to bed and she is in our custody.”

When asked of the sex of the baby, he thundered, “I told you the girl has put to bed.” When prodded for further question, he terminated the call.

A source disclosed that the baby girl bears the resemblance of the Lebanese, which suggests that Hassan might be responsible after all.

When Bulus was confronted to know if he has been contacted, almost a week after his cousin had a baby, he said, “NAPTIP has not told me that Rhoda has put to bed. I am only hearing it from you now.”

The Zonal Coordinator, Nigerian Immigration Service, Zone “A”, Ikeja, ACG Musa Maza said they are yet to inform Ali about the development.

“When he was arrested, and looking at the exigency of the situation on the ground that life was involved especially as the little innocent girl was allegedly impregnated by the Labanese man; we quickly had to send both of them to the appropriate authority –NAPTIP. It is when they hand the man back to us we would continue with our investigation to determine his immigration status in the country.”

According to Maza, the service tried to get Ali’s passport to determine his status, the Lebanese said his passport was with the embassy.

LAST time, you arrested a Labanese that was alleged to have raped his house help and handed him over to NAPITIP. They are saying that the Labanese has valid papers. How true is that?
I will want to state categorically without mincing words, Nigerian Immigration Service (NIS) is wholly committed to ensuring that justice is done in this case. My letter to NAPTIP is clear and unambiguous. I specifically requested that as soon as they are through with their investigations, the Labanese should be handed back to me for us to continue with our investigations. We arrested him and had to look at the exigency of the situation on ground; life is involved. This is a little innocent girl allegedly impregnated by the Hassan Hussien Ali and she needs care and attention. We quickly had to do the needful by sending her to the appropriate authority –NAPTIP. It is when they hand the man back to us we would continue with our investigation to determine his immigration status in the country. We feel sending him to NAPTIP is the most honourable thing to do for now so that the girl can be taken care of.

Are you saying he has papers?
It is when he is sent back to us we would now commence our investigation. If we were to start our investigation whether he has papers or not, it might drag for a period of time and wouldn’t be fine under the situation the girl found herself. It means both the girl and the Labanese would remain in our custody.

When the Labanese was arrested, one would have thought that, looking at the condition of the lady, why not carry out preliminary investigation to determine whether he has valid papers or expired through his passport?
That cannot be done in absentia. Again, the very first day he came, we demanded for his passport and claimed the passport was with his embassy.

Does the Immigration have the power to write the embassy to get the status of a particular person they have his/her passport?
The immigration has the power but it has to come from our national headquarters. I don’t have the power on behalf of the service to write to the embassy because we have to be very careful because we are dealing with diplomatic situation. It is only my Comptroller General that can do that. I will be going out of my way to unilaterally write to the embassy demanding for the passport of Hassan. However, if we have him physically in our custody, we would commence our investigation on how to get his passport.

What is Immigration doing to mop up hundreds of illegal immigrants in Lagos ?
Mind you, most of these people you are talking about are members of ECOWAS nations and we have protocols guiding movements of these foreigners in our country. Therefore, we have to be very careful in dealing with this kind of situation in order not to invoke unnecessary diplomatic row. It is very sensitive. However, I want to appreciate the fact that we are quite aware of the presences of these people – in a collection of people, you find some who are law abiding and those who are not – but I can assure you that the service is certainly on top of the situation. Efforts are on to deal with the situation appropriately.

The brother of Rhoda alleges that NAPTIP have been threatening him. Isn’t it time the matter is reported to the police for justice to be done?
Just as I told you earlier, we do not have special interest in this case other than we want to see that justice is done. We cannot now write a letter of reminder because my letter to them (NAPTIP) was explicit enough, self-explanatory. As soon as they are through with their investigation, they should hand him over back to us so that we can commence our investigation. I want to quickly say this that if you are not satisfied with what NAPTIP is doing or they are not forthcoming or suspect compromise, you have the means and the power to ask for further explanation from them. They have higher authority somewhere to ensure that action on this issue is expedited.

What will happen if Hussan Hussien Ali escapes from NAPTIP’s custody with the way they are handling the matter?
Until that happens. We have our legal unit. They will be brought in and advise us accordingly on what to do.