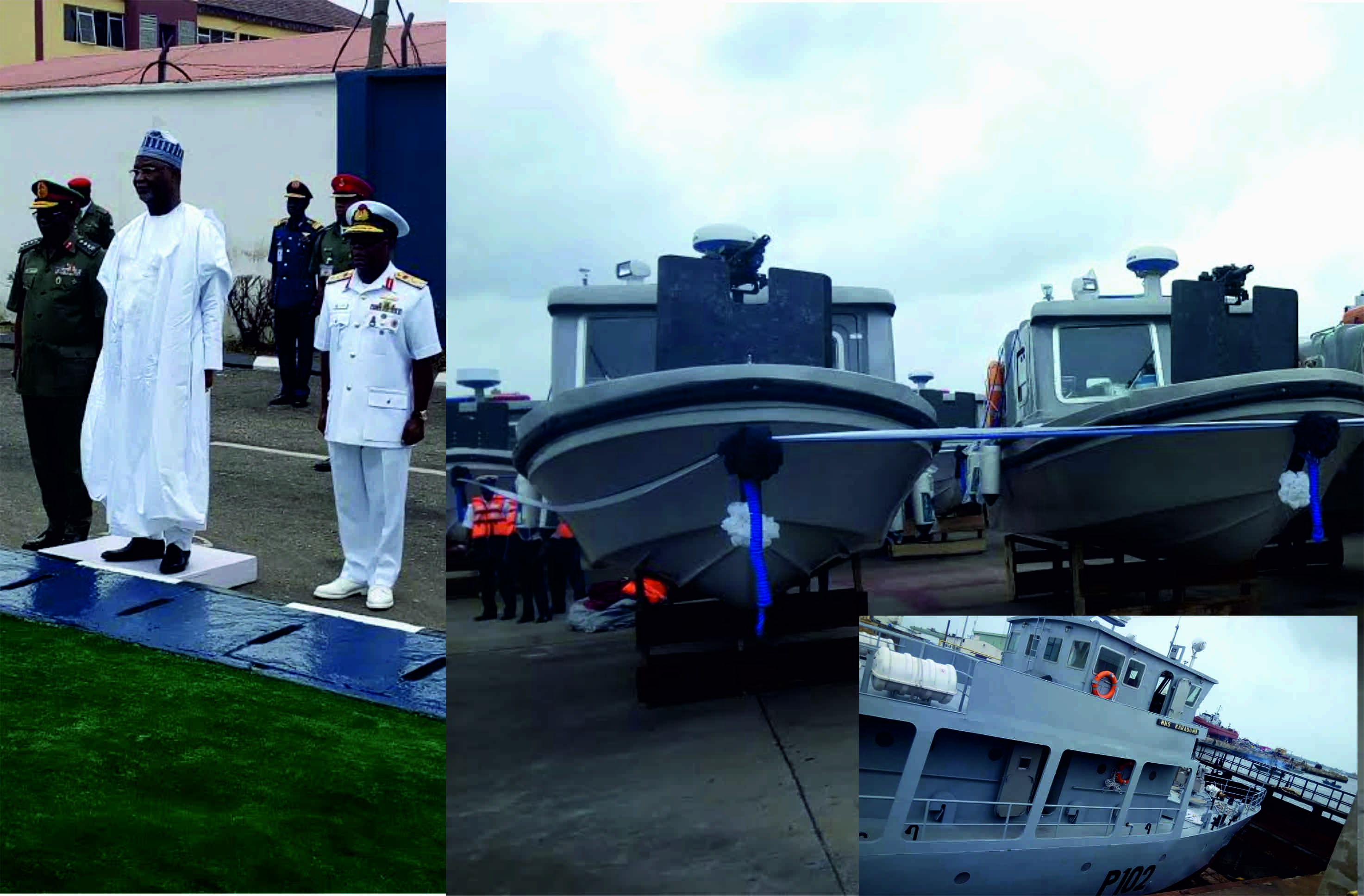 Also commissioned were 39 gun boats in addition to 45 operational vehicles that would boost land operations to enhance NN response capability in fighting crude oil theft, vandals and militancy in the country.

The boats that were commissioned by the Minster of Defence, Alhaji Mansur Dan-Ali, who was represented by the Permanent Secretary, Ministry of Defence, Ambassador Danjuma Sheni said the emerging security challenges in the country have had great consequences on the polity in the North East and the Niger Delta region of our nation.

He explained that the challenges had continued to demand a great deal of human and material resources to surmount, which in the light of dwindling revenue would be sustainable only with generous innovations and incorporations of home grown solutions.

On the basis of this, he added, the Epenal Boat Yard Port Harcourt was contracted to construct 30 by 8.2m boats for the navy in 2015, which was delivered earlier this year.

Ambassador Sheni further reiterated that “These were immediately inducted into the service and used for rigorous patrols in the Niger Delta whose availability has helped to stem the tide of criminal activities in the area.

“Encouraged by the success of the venture, the contract for a further 50 was immediately awarded which has yielded the additional 30 boats being lunched today and the remaining 20 will be delivered subsequently.

Sheni said the boats were fitted with appropriate weapons, ballistic protection and other facilities being improvement promised at the launch of their precursors.

Reiterating, he pointed out that the boats being launched would boost the on-going patrol efforts in the various rivers and creeks of the country which would further enhance the nation’s maritime security.

“This is a remarkable feat for the Nigerian Navy and the Armed Forces in general with the commissioning of boats constructed mainly by local indigenous contractors. The boats would be inducted into operations immediately in the Niger Delta to combat the militants and hopefully, they would be very useful and benefiters in the region.

On his part, the Senate Committee Chairman on the Navy, Isa Aman-Isa said they are doing so much for the Navy in the area of acquisition of more platforms. “Our plan is to increase the platforms with the hope that the force would get more from the loan from China-African relations of about $60 billion. In the 2017 budget, we have started making adequate provision for the navy to get more funding. By next year, the issue of Niger Delta Avengers would be a thing of the past. Why all these things are happening is because the equipment are not much but with the local construction we are doing, by the end of this year or next, the activities of Niger Delta would be a thing of the past.

The Chief of Naval Staff, Vice Admiral Ibok Ete-Ibas in his welcome remarks said that the Epenal boats were an improvement on 30 others unveiled in Port Harcourt in February.

“These boats no doubt, have boosted navy maritime operations. As part of the efforts to continue to achieve unchallenged dominance of our maritime environment, the navy within a space of six months has launched another 39 specially built patrol boats into her fleet.

“These efforts, both then and now, represent navy’s modest contribution to enhance national security and prosperity. Of the 39 boats launched, nine were acquired from Sri Lanka and would be greatly helpful for patrol of territorial waters and the contiguous zone.

“The decision of the navy to take such bold steps of building 60 boats locally and with 34 more to join shortly, could be considered as part of the resolve to look inwards in the production of our naval hardware.

“The mounting operational challenges in the face of progressive dwindling economy necessitated the navy to explore more cost saving options through local construction of these patrol boats. For immediate appreciation as I declared in February, the cost of production of a unit of the boat is less than half the cost of producing similar boats from overseas.

“This rate has been kept despite the massive erosion of Naira value between November 2015 when the production was contracted and now. These boats retained all positive features of the previous set including being fitted with appropriate weapons for credible firepower.

“In addition, it benefitted from the incorporation of anti-ballistic protection, giving it edge for more audacious and aggressive employment. They are also expected to present a better sea-keeping ability with a wide margin for the many corrections applied to the design concept of Lot 1, through series of stage trials in the production cycle.

“I can say we are gradually but steadily moving towards the saturation of the nation’s backwaters with patrol boats for improved security of our maritime domain. The boats would be deployed optimally by various relevant navy units,” Ibas reiterated.

Soldiers Brutality: 81 Div GOC sets up board of inquiry