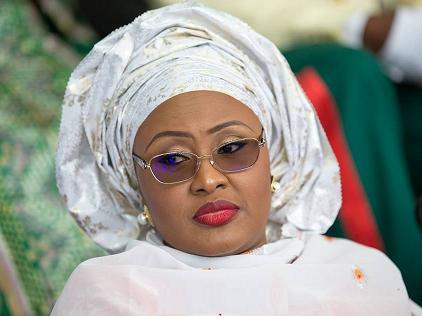 2023: APC women flag off presidential campaign in Kwara
Share this on WhatsApp
Spread the love

The Wife of the President, Mrs Aisha Buhari, on Tbursday flagged off the 2023 presidential campaign for the All Progressives Congress (APC) in Kwara.

Mrs Buhari said in Ilorin that she has set a platform for the voices of women to be heard.

APC women on stage during the campaign

She expressed the optimism of women and youths to deliver in the upcoming general election.

While highlighting the achievements of the present administration of President Muhammadu Buhari, she described the APC as a party of peace and progress.

Mrs Buhari therrfore urged women to carry the campaign with seriousness and commitment.

Gov. AbdulRahman AbdulRazaq, who appreciated the choice of the state for the campaign, said Asiwaju Bola Tinubu has the right network to take the country to greater heights given his achievements in Lagos State.

AbdulRazaq said he would continue to champion the course of women in the state in governance.

He declared that there is no vacancy for any other party in the state as the state was for Tinubu.

While highlighting the achievements of his administration in state, he urged residents not to relent in their believe to the party.

The first lady of Kwara, Dr Olufolake Abdulrazaq, expressed optimism of women and youths to vote for the party in the state given the track records of the president administration.

Dr Oluremi Tinubu said the choice of Kwara is divinely chosen, adding that they will bring succour to unemployed youths in the state as well turn around the fortune of Nigerians for good.

He said that the governor uplifted the state from the way it was as well stressed the development of the state since inception of the present administration.

He said the governor adopted all inclusive governance as well restored the glory of the state.

He commended the wife of Tinubu for choosing Kwara for the flag off of the campaign.

“Kwara will give Tinubu and Shettima 100 per cent support,” he promised.

He commended the governor for what he has done for women and youths in the state.

The National Women Leader, Dr Beta Edu, said women would be prioritised and expressed optimism of 40 million votes from women in the state.

She therefore urged women not to be distracted in their set goals.