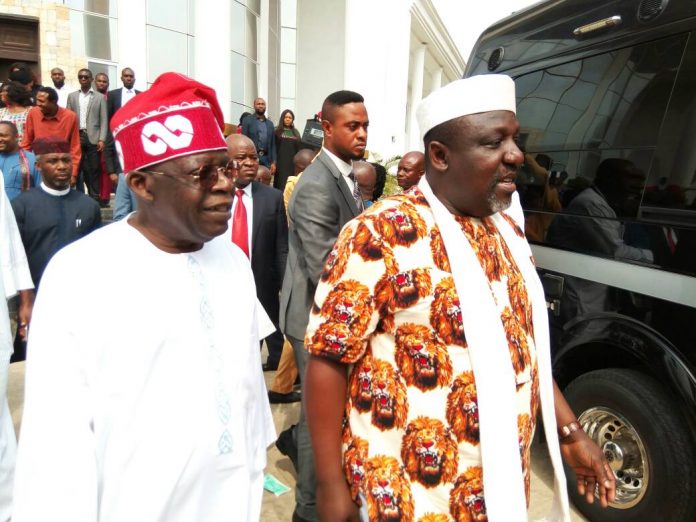 Ever since former Lagos governor Bola Ahmed Tinubu, who is also the national leader of the All Progressive Congress, APC, declared his intention to run for the presidency in 2023, there has been a lot of debate in which some are supporting him and others are kicking against it.

However, many people seem to have focused their attention on the former governor of Imo State, Rochas Okorocha, who recently declared his intention to run under the same APC, in which they believe that he is also giant enough to hijack the presidential ticket from Bola Ahmed Tinubu.

Firstly, if you are to look at their ages, it clearly shows that Roches Okocha, who is currently 59 years old, has a higher chance of getting the APC presidential ticket offer than Tinubu, who is 69 years old, based on how Nigerians seem to have put their belief in the claim that the younger president has the highest chance of rescuing Nigeria than the older one.

Apart from that, Rochas Okorocha, an Igbo man born in the North, had a better chance of receiving northern support than Tinubu, who has no ties with the northerners, as well as the fact that the Southeast region from which Okorocha hails has never ruled Nigeria since democracy was restored, unlike the southwest region from which Tinubu hails, which produced a president for eight years and is currently producing a vice president of the country.

If we talk about how sellable and popular both of them are, it’s more likely for the northern cabals to choose Tinubu, who has been gaining endorsement nationwide and has a higher probability of defeating the PDP candidate than Rochas Okorocha.

Although nothing is impossible, but if Tinubu starts playing his cards, and plus the fact that he is one of the strong pillars that built APC and brought it to power, he surely has a good chance of defeating Rochas Okorocha and securing the presidential ticket.