Connect with us
Share this on WhatsApp
Spread the love
The Arewa Community in Lagos State has unanimously vowed to deliver well over 1.5million votes, to make good the ambition of the APC’s presidential candidate-Asiwaju Bola Ahmed Tinubu in the 2023 general elections.
The decision to replicate the unprecedented block votes witnessed during the days of Governor Babatunde Fashola was reached at a forum held to confirm Engineer (Alhaji) Sa’adu Yusuf Dandare Gulma as the Chairman of the Arewa communities within the Lagos State APC.
According to Sa’adu the years of balkanized Arewa community in the state has not brought any good to his people, both politically and socio-economically in Lagos.
This informs why the new era is necessary, to forge a more beneficial community where
every segments is recognized and given opportunity to strive.
“It is a new DAWN and new chapter in Arewa Lagos state having been confirmed state Chairman Arewa Community Lagos.
“Objective politics is now in full gear. Lagos Arewa Community will deliver 1.5 million votes to Asiwaju come 2023.” 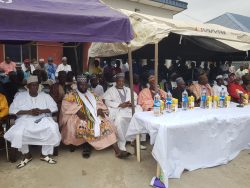 “Shuwa Arab, North Central, North East and North West are now together, purposely for Asiwaju Bola Ahmed Tinubu’s presidency and Senator Kassim Shetima Vice President in Nigeria.
“We realized that our coming together will make them get block votes from us and ensure we vote APC from top to bottom.
“I can tell you categorically that all our traditional rulers have met already the remaining ones yet to meet are fine tuning  the process already.
“We have eight ruling house of Arewa in Lagos Seriki Fulani, Seriki Hausa Agege, Seriki Shuwa Arab,Seriki Kanuri,Seriki Igala,Seriki Dofawa, once this eight serikis come together Arewa has become one.
“The Chairman of Kataf in Kaduna and Tiv are with us, we have their letter and support. 95 percent of the Arewa you see in Lagos all have their PVCs.
“Those who are not with it due to where they registered initially will have it transferred to Lagos, while those who don’t have at all will get new ones, we are passionate about Asiwaju’s presidency.” Sa’adu reaffirms.
The General Secretary Arewa Community in Lagos, Alhaji Gidado Muhammed who also graced the occasion appraised the personality of the Arewa Chairman – (Sa’adu) noting that he is unique and focused, urging all to co-habit peacefully and come out to vote during election.
The Chairman Shuwa Arab Progressives Forum in APC, Alhaji Abubarka Ibrahim in his short remarks also noted that his group is in total support of forging a united Arewa.
“We are together, all from the northern part of Nigeria in our various communities, Shuwa Arab are solidly behind you in this course of unity for the benefit of all.”
Comrade Aliyu Wabba of the Arewa Okada Rider Community gave a trajectory of moves to ensure the Arewa communities are together,noting that previously the lack of oneness had placed the community in a disadvantaged position in Lagos State.
“We initially had a divided Arewa, so attempts were made to bring them together. One led by Architect Kabir and the other by Dandama. 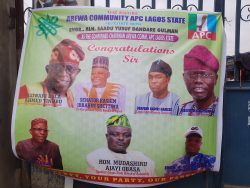 “Arewa was clearly in a disadvantaged position, so moves were made to harmonise the two. Separation of Power was advocated,one holds the apex leader of Arewa and another holds chairmanship position .
“We  discovered that we need to approach 2023 with a united front in Arewa as visible here today, so we are no longer divided in Lagos.
“Going forward, we will intensify efforts to stem ugly trends amidst us, Sa’adu our Chairman is the points man for good governance and the task for him going forward is to bring all together.
“The Struggle started long time ago,he is a visionary leader who was first to recognise every segment of the Arewa communities in Lagos state.
“Prior to now he was able to identify with the scrap dealers ,market leaders and others all this units will be effectively harnessed across board to ensure massive votes for Asiwaju.” Aliyu said.
Hajia Azabe Ibrahim Zavi former woman leader Lagos State Arewa Community while speaking with newsmen also affirmed that block votes will be delivered by Arewa women come 2023 to ensure Asiwaju wins the election.
“We are fully on ground, we are better recognized now more than ever before. Saadu is a man of the people, everybody is so happy with him.
“His leadership style  is like a relationship.  The women are on ground and solidly behind Asiwaju. It is time to pay Asiwaju back. They were told to do the needful as regards PVC collection.
“Since the time of Governor Babatunde Fashola was the last time we had block vote last, now we are replicating that again, Asiwaju presidency is none negotiable.
“Every women in their respective homes have been counseled to ensure their children who are eligible to vote collect their PVC, we have sensitized our people all over Lagos.
Comrade Kudu Abubarka one of the Arewa mobilization stakeholders while speaking at the confirmation parley notes that they are out to break record set during Governor Fashola’s era
“The significance of this event is that we want to break a record, no governor surpassed Fashola who had 1m votes.
“In 2023 Sanwoolu will have over 1million votes, with Alhaji Sa’adu’s confirmation as the authentic Arewa Community Chairman by the APC state Chairman Pastor Cornelius Ojelabi.
The Executive Secretary of the Physically Challenged Arewa Community in Lagos State, Comrade Mohammed Zanna also corroborated the importance of unity amongst the Arewa folk.
“Uniting the Arewa people in Lagos is key, bringing them under same umbrella, we gathered here to show support for Asiwaju. We strongly support his presidency.
“Over the years we have not been carried along in any socio cultural and political gatherings let alone having a say and representation. It is a great opportunity for us.
“We are not part of the politics prior to now and we have suffered greatly, so now that we have representation in government, this opportunity avail us a voice for greater Lagos and Nigeria.
“The vulnerables are being carried along here, we all have our voters card and we cannot play in isolation.
“There have been some changes, special office for the physically challenged. We have better recognition, for us to also exercise our franchise.
Some of the Arewa communities represented at the forum are: Coalition of Arewa community, from Sokoto, Kebbi and Zamfara state, Cattle dealers association, Shuwa Arab Progressives Forum, Arewa Okada Riders community, Otto Arewa Community, scrap dealers, market leaders amongst others.
Also on ground to grace the occasion were, Alhaji Sani Gabaki Daya,Alhaji Bala Muhammed and other representations from the Tinubu Support Organisation (TSO).
Share this on WhatsApp
Related Topics:
Up Next

The 2022 Primary Election, The Youth And The Future of Nigeria – An Evaluation: Notes for a better country (2)