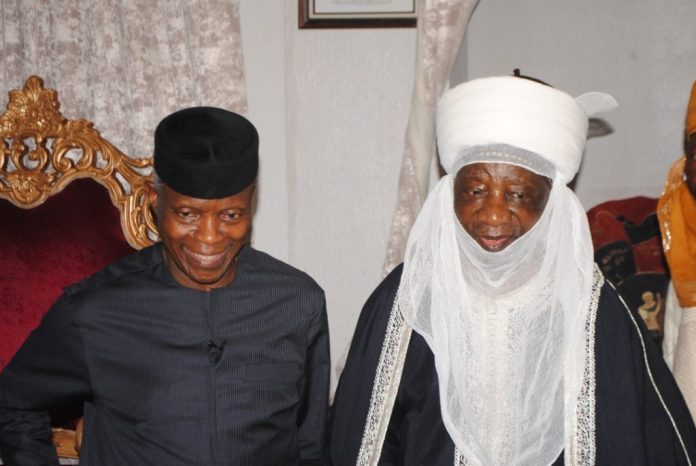 Prof. Yemi Osinbajo says his experience as Nigeria’s Vice President in the last seven years under President Muhammadu Buhari has placed him in high pedestal to lead the country come 2023.

Osinbajo stated this during a visit to the Emir of Ilorin, Alhaji Ibrahim Sulu-Gambari, on Monday.

He was in Kwara to address All Progressives Congress (APC) delegates ahead of the May 30 scheduled APC Presidential primaries.

According to him, working under Buhari in the last seven years has greatly exposed him to series of security and economic challenges facing the country.

The vice president explained that these experiences have placed him in a better position to address them due to exposure and opportunities given to him by the Buhari adminstration.

He noted that being vice president of Nigeria was a great opportunity that placed him in front burner against other aspirants vying for same office, promissing that as soon as he get to the office in May 2023 he will hit the ground running for a more prosperous Nigeria.

The vice president lauded the fatherly role of the Emir and seek his support towards his aspiration.

Osinbajo said that his respect and regard for the Emir and the Emirate informed his visit to the palace to seek his fatherly support.

Earlier, Gov. AbdulRahman AbdulRazaq said the vice president has been a friend of Kwara who had launched the social investment programme and Owo Isowo scheme for the vulnerable and less privileged in the state.

Respinding, the Emir of Ilorin lauded the vice president and said his aspiration was based on his past record which has earned him respect all over.

The first class traditional ruler and Chairman of the state Council of Chiefs added that the challenges ahead of Osinbajo were enormours and tasked him to unite the country, if elected.

Sulu-Gambari, who prayed for success of the vice president in his 2023 campaign, asked God to guide him through the process.

“You’ve been very dutiful. Your track records alone are enough to give you success in your endeavour.

“However, you have a lot of task ahead of you. May God guide you and protect you from all your enemies,” said the Emir.