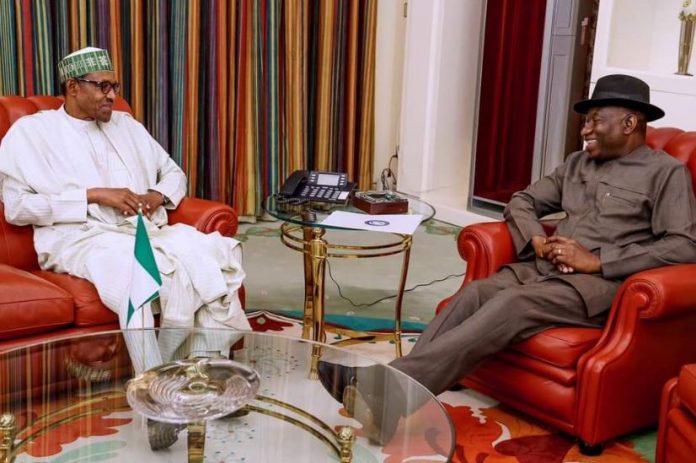 The South-South Presidency in 2023 has dismissed a report that former President Goodluck Jonathan accepted to n offer from President Muhammadu Buahri to contest the 2023 presidency.

Dikivie Ikiogha, who is the National Chairman of the group and political associate of Jonathan stated this.

“I have just seen a publication credited to the group, saying that the former President, Dr Goodluck Jonathan has accepted to run for the presidency. That is not correct,” he told the Punch.

Ikiohga however said anyone who wants to run from the south-south will enjoy his group’s support.

According to the report, APC Caretaker Committee Chairman and Yobe Gov Mai Buni has worked it out that Buhari met with Jonathan to propose the PDP stalwart defect to have the ruling party’s ticket.

It added how Buni has been working to scuttle the presidential ambition of APC national leader Bola Tinubu whom many think Buhari owes for his 2015 victory. At least two governors from the north has supported the Jonathan move, accordig to the news platform.

The preparation necessitated the meeting Ikiogha’s and his group had with Jonathan days ago.

Ikiogha said this is misleading.

“When it has not happened and people want to put the record in a wrong way, that is not good,” he stated.

“Just as we visited any other people or aspirants or suspected aspirants, we also visited him (Jonathan). And he cannot of course push us out. He is the father of South-South politics today.

“So if we want to take a major decision that concerns the South-South, there is no way we cannot meet him and sell our idea to him, which we did.”