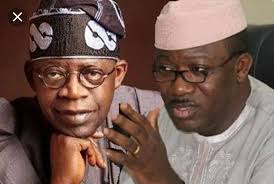 Ekiti Gov Kayode Fayemi did a back flip weeks ago when the heat the federal government Ruga Policy generated became unbearable, and Ekiti people insisted their governor must not buy into it.

The governor, by caving in, hurt the north, and he has entered their black book—against 2023.

At least Dr Junaid Mohammed, a former federal lawmaker and leader of thought in the north, already scored it against Fayemi.

‘Ekiti will not, under any circumstance, cedes its land to outsiders”, the governor said.

He was referring to Fulani herdsmen for which the policy was formulated to ease the tension between them and farmers.

That statement carried so much negative weight because Fayemi was perceived as one of Aso Rock’s promising favourites who shouldn’t rubbish any policy the seat of power hands down.

According to Mohammed, Fayemi has presidential ambition in 2023, and the lawmaker doesn’t understand why the attention is so much on APC national leader Bola Tinubu alone.

“That is why Fayemi has been busy making reckless statements saying no outsider will take Ekiti land for Ruga settlement,” said Mohammed in an interview with the Daily Independent.

“As I am talking to you today, 72 per cent of the total landmass in Nigeria is in the North,” he said.

“So if somebody who can only be president for the Yoruba race is talking about Ekiti not giving their land to outsiders, where is the land? Seventy-two per cent of land and good water resources for farming are in the north.”

As for Tinubu, who has been frugal in his comments on the Ruga policy and other Fulani-related topics causing tension across the nation, the north may have no problem about him replacing President Mhammadu Buhari.

It is a free country, and anybody can dream.

“If Tinubu wants to be the president of Nigeria, and he asks for my advice, I will say go ahead,’ said Mohammed.

“I will rather have Tinubu as president than have some of the people in the south-east who are also ambitious, and want to blackmail Nigeria into ceding power to them.”

He also insisted even if Tinubu were to be drunk, he would be a better president than Goodluck Jonathan.

The critic said he is sure Tinubu is also better than Fayemi.

“Tinubu has more goodwill among northerners than Fayemi who is a crook and has criminal records in the United Kingdom .”

He said he has no beef against the governor.

“I have problem with anybody who because of his ambition wants to introduce confusion which can lead to mayhem and bloodshed. I don’t want that.”