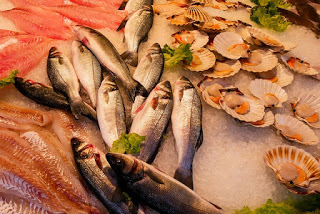 The common knowledge is that fish is good for your health. But these ones are bad and will do you more harm than good. National Daily health presents the 5 examples of fishes to avoid.

1. Bluefin Tuna
The World Wildlife Fund put the bluefin tuna on its list of endangered species, and Seafood Watch warns their populations are depleted and overfished. Bluefin have high levels of mercury and can be high in PCBs, so EDF recommends eating no more than 1 serving per month of this fish.

2. Orange Roughy
This fish lives a long life but is slow to reproduce, making it vulnerable to overfishing. As Seafood Watch puts it: “Orange roughy lives 100 years or more—so the fillet in your freezer might be from a fish older than your grandmother!” This also means it has high levels of mercury, causing EDF to issue a health advisory.

3. Salmon (Atlantic, farmed in pens)
Most farmed salmon are raised in tightly packed, open-net pens often rife with parasites and diseases that threaten the wild salmon trying to swim by to their ancestral spawning waters. Open-net farmed salmon are often given antibiotics to combat diseases, and their food and waste pollutes the ocean. Freshwater-farmed salmon have earned a Best Choice status from Seafood Watch and some open-net systems are rated as Good Alternatives (see more salmon recommendations from Seafood Watch). There is hope that consumer pressure will encourage more farms to continue to adopt better practices.

4. Mahi-Mahi (Costa Rica, Guatemala & Peru)
Imported, longline mahi-mahi, or dolphinfish, is rated as one of the least eco-friendly fish by the Environmental Defense Fund. There is concern about bycatch, including sea turtles, seabirds and sharks, getting tangled in the fishing gear when mahi-mahi is fished. However, mahi-mahi caught in the U.S. and Ecuador with troll lines is ranked under Good Alternative by Seafood Watch and is the better choice if you’re hankering for this particular fish.

This fish grows and matures slowly (living as long as 50 years), so it is susceptible to overfishing. This depletion of Atlantic halibut populations, is a reason most government prohibits commercial harvest of this breed, found in the North Atlantic Ocean, and Seafood Watch rates it “Avoid.” Pacific halibut is a good alternative, as it comes from well-managed fisheries with little habitat damage and low rates of other marine life being caught as bycatch.