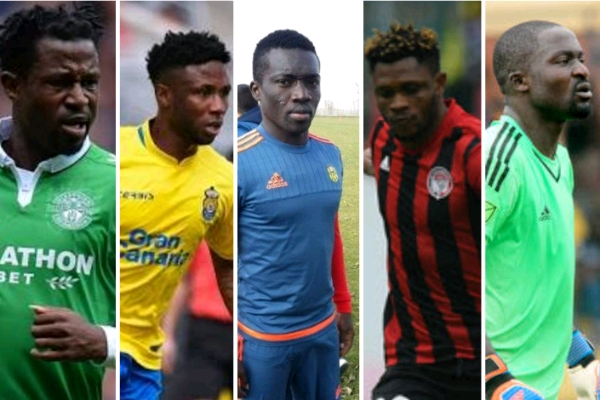 Share this on WhatsApp
Spread the love
With the 2018 FIFA World Cup inching closer to the big kick off in Russia,
National Daily look at  at five players who deserve an opportunity to vie for selection by Super Eagles coach Gernot Rohr ahead of the team’s trip to Russia.
EFE AMBROSE
It is evident that one area which the Super Eagles need to strenghten ahead of the 2018 FIFA World Cup is in the defence.
One player who has what it takes to add experience and stability in the defence is Efe Ambrose.
Since last featuring for the Super Eagles in a 1-0 away loss to Egypt in the qualifiers for the 2017 Africa Cup of Nations qualifiers in 2016, Ambrose is yet to get a recall.
But the Hibernian defender can still do a job for the Super Eagles both at the right-back and central defensive positions.
Shehu Abdullahi and Tyronne Ebuehi have featured at right-back while the duo of William Troost-Ekong and Leon Balogun seems to have formed a formidable partnership in the middle of the defence, but Ambrose can have a go with these players for both positions.
Ambrose won the 2013 AFCON with the Eagles, was at the 2013 FIFA Confederation Cup and was also at the 2014 FIFA World Cup. This is an indication that he has the experience at the top level.
He has played all 33 league games for his Scottish club Hibernian which means he is a regular and will be super fit if given the chance to be in Rohr’s 23-man squad.
IMOH EZEKIEL (Winger)
The Super Eagles is blessed with pacy and skillful players who can wreak havoc to any defence on their day.
Players like Victor Moses, Moses Simon, Ahmed Musa, Alex Iwobi all showed how deadly they can be as was evident during the 2018 FIFA World Cup qualifiers.
But one player who can be a valuable addition to the plethora of wingers in the team going to the World Cup is Las Palmas forward Imoh Ezekiel.
Blessed with pace and the ability to take defenders on from the wings, it is a surprise that Ezekiel can only boast of just one cap for the Eagles which was in a 0-0 draw against Mexison in a friendly in 2014.
Despite his lack of opportunity with the Super Eagles, Ezekiel showed what he can do as he was one of the outstanding players for the U-23 Eagles who won bronze at the Rio 2016 Olympic Games.
His appearance at the 2016 Olympics also shows he has top competition experience which will be a plus for the Super Eagles in Russia if given the opportunity.
AZUBUIKE OKECHUKWU (Midfielder)
Azubuike Okechukwu’s only appearances with any Nigerian national team was with the U-23 Eagles where he excelled in the midfield.
He captained the team to a bronze medal finish at the 2015 All Africa Games in Congo Brazzaville and was part of the Rio 2016 Olympic U-23 Eagles squad.
Diminutive in size, Okechukwu has proven that he has the football brain to contribute in the Super Eagles midfield if called upon.
Operating in a deep-lying midfield role, Okechukwu is comfortable on the ball and can link both defence and attack, an area which was brutally exposed during the Eagles’ two friendly against Poland and Serbia.
Also Okechukwu can create scoring opportunities from his deep midfield role, a skill which apart from John Mikel Obi, no other midfielder in the current Super Eagles can produce.
He has played in 21 of Yeni Malatyaspor’s 28 league games in the Turkish top flight.
AARON SAMUEL (Striker)
The only recognised number nine in the Super Eagles going to the 2018 FIFA World Cup is Odion Ighalo.
For a team that is serious about doing very well at the World Cup, relying on just one striker is not good enough.
One player who should be given the chance to show what he can do is Amkar Perm striker Aaron Samuel.
Samuel is no stranger when it comes to the Super Eagles as he has seven caps and two goals to his name.
The 23-year-old is big and strong and can be a good backup for Ighalo who struggled in the Eagles’ friendlies against Poland and Serbia.
After struggling at CSKA, Samuel moved to Amkar Perm in February of 2018 where he seems to have relaunched his career. He has so far scored two goals in four league games.
DELE AJIBOYE (Goalkeeper)
The Plateau United shot stopper is yet to feature for the main Super Eagles team, but his appearances for the home-based side has shown how useful he can be if only Gernot Rohr can put faith on him.
Ajiboye had the opportunity of being in the Super Eagles squad in their 2018 World Cup qualifiers against Cameroon in Uyo and Yaounde, and the game against Zambia also in Uyo.
He was second choice to Ikechukwu Ezenwa during the 2017 West Africa Football Union Cup of Nations in Ghana where he kept in a handful of games.
At the 2018 Africa Nations Championship (CHAN) in Morocco, Ajiboye also did well when called upon to replace Ezenwa who got injured in their semi-final match against Sudan.
Ajiboye was one of the reasons the home-based Eagles made it to the final as he made daring saves to keep the Sudanese at bay as Nigeria won 1-0.
In the final, though the Eagles were thrashed 4-0 by hosts Morocco, Ajiboye made excellent saves to make sure the Eagles did not lose with a cricket scoreline.
With the uncertainties surrounding some of the goalkeepers currently in the Super Eagles heading to the World Cup, Ajiboye should be given the chance once again to prove his worth.
Share this on WhatsApp
Related Topics:2018 FIFA World Cup
Up Next

Bank W gets an open love letter on his birthday