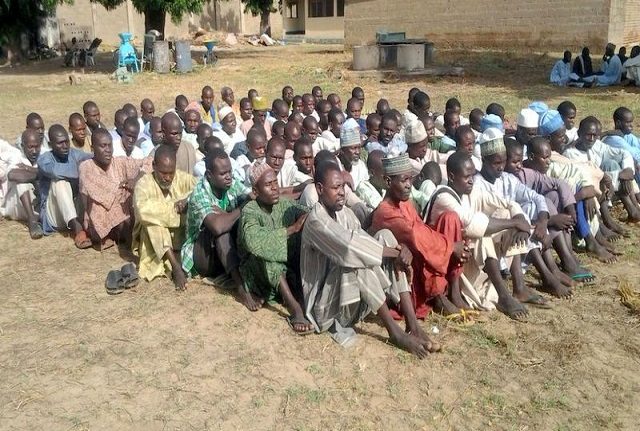 Nigerian Army on Monday disclosed that about 700 Boko Haram insurgents have surrendered in Borno state.
The Chief of Army Staff, Lt.-Gen. Tukur Buratai, said the insurgents handed over on the fringes of Sambisa Forest to federal troops.
National Daily gathered that the army chief gave the hints during a Photo/Arts Exhibition which was part of activities to mark the week-long Nigerian Army Day Celebration (NADCEL).
Gen Buratai said, “A short while ago, I received the good news that about 700 Boko Haram terrorists within the fringes of Sambisa Forest have surrendered.
“Some others are in the process to surrender, This is a clear indication that the Boko Haram war is clearly being won.
“The situation is being awaited; more details will come from the Theatre Command in Maiduguri later in the day.
“I will like to congratulate not only our gallant troops, but indeed the Nigerian Navy and Air Force who are also operating in the North-East.
ALSO SEE: Nigerian Army confirms killing of an officer, three soldiers by Boko Haram IED
“I congratulate Nigerians as well because I know what we went through during the Boko Haram insurgency and definitely, it will be a great sigh of relief as these terrorists are finally capitulating.”
Given clarification on the those tgat surrendered, the Director, Army Public Relations, Brig.-Gen. Sani Usman, explained that 70 of the surrendered terrorists were already being profiled.
He explained that “preliminary investigation showed that among them were key commanders and influential members of the Boko Haram.
“One of whom matches suspect number 225 on Boko Haram terrorists most wanted list released by the Nigerian Army.
“So far, the surrendered terrorists have been making useful statements and it is expected that many more will surrender,’’ Usman reiterated.
Speaking before the disclosure of the cherry news, Gen Buratai said that the army had made “tremendous achievement’’ in the counter insurgency operations in the North-East.
He noted that the exhibition marks a true way of capturing the facts on the ground just like motion pictures captured thousands of words.
PV: 0