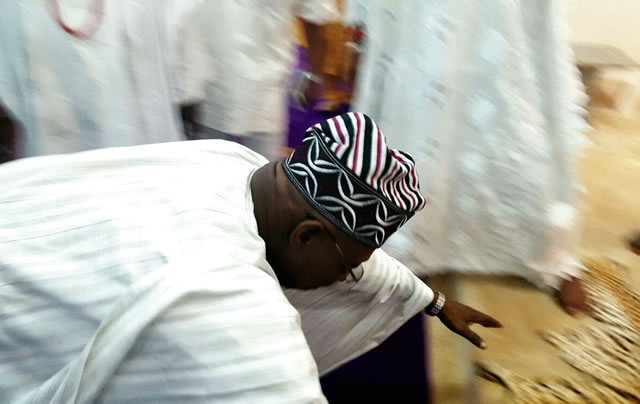 Identifying with the unity initiative of the Ooni of Ife, HRH Enitan Adeyeye Ogunwusi, visiting former President Olusegun Obasanjo was on all fours before the 4o-year-old monarch last weekend.

“I commend the role of Ooni in ensuring peace in Yorubaland. Continue what you are doing,

especially your unity course. I am happy with the move taken so far,’ he said while addressing the Oba at the palace.

Obasanjo’s gesture hit many present at as a surprise, but others, cheering, acknowledged his respect for tradition.

According to him, Ife remains the origin of the Yoruba nation, and he urged the Ooni to keep up his peace effort no matter what people think.

“It is only a sign of honour for the Ooni to visit anyone. That does not stop Ile-Ife from its position in the history of Yorubaland,” said Obasanjo.

Since his ascension, Ogunwusi has been on a kind of shuttle diplomacy to a number of southwestern states visiting traditional rulers, and making peace after about a century-long rivalry among the monarchs.

The Ooni has visited the Alaafin of Oyo, Awujale of Ijebuland, and others. He believes the monarchs must first be united for the Yoruba and, indeed, Nigeria to progress.