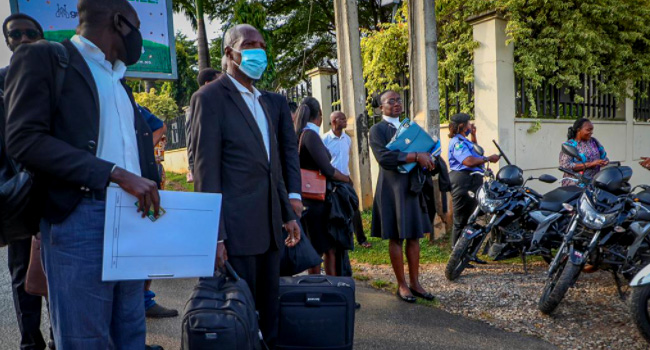 The Department of State Services (DSS) on Thursday repeated the restraint imposed on journalists and lawyers from entering the courtroom in Abuja during the trial of Nnamdi Kanu, leader of the Indigenous People of Biafra (IPOB) as the security agency did in his last arraignment in court about three months ago.

No journalist was allowed into the courtroom for coverage of the proceedings. The DSS officials were said to have explained that the refusal to allow journalists entry into the court was an “order from above”.

However, journalists at the court were later told by a source in the courtroom that Kanu took his fresh plea to the seven amended charges at about 10.45am, and pleaded not guilty to the charges read to him by the prosecutor.

The presiding Judge, Justice Binta Murtala-Nyako, after the pleas adjourned the suit to November 10 for hearing of Kanu’s application, challenging the competence of the charges.