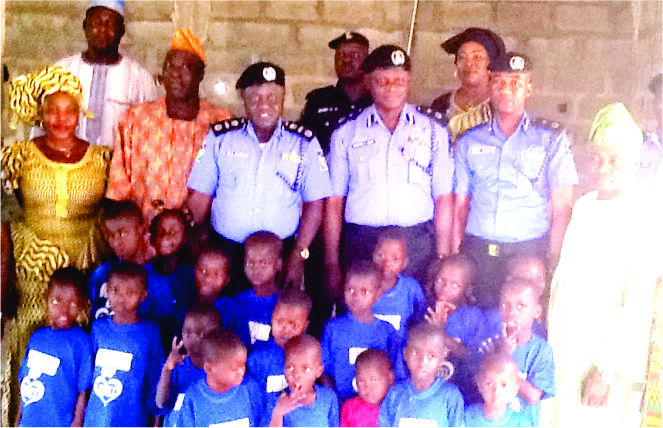 THE Assistant Inspector General of Police in charge of Zone 2 Command Headquarters, Lagos, AIG Bala Hassan has made donations to Stella Obasanjo’s Motherless Home located at Ibara GRA Abeokuta as part of the force show of love, care and affection to the orphans.
He said that the donations and visit to the home was at the behest of the Inspector General of Police, IGP Solomon Arase who has always show concern to visit the orphanage, hospitals to show love and as well as give necessary humanitarian support for their care.
Making donations of items which include 10 bags of rice, 10 cartoons of Indomie packs, 20 tubers of yam, 10 crates of Multina drink, two 30 litres of groundnut oil and five cartoons of frozen chicken to support the upkeep of the kids, added the force would continue to support the home to ensure that the children do not lack basic needs.
Reacting to this gesture, the Director, Child Development Department, Mr Kehinde Olademeji Egbelowo, expressed gratitude to the IGP and AIG for their immense support and kindness to the home. He used the opportunity to solicit for continuous support from the Force for the upkeep of the children.
The kids, who are between the ages of 2 8 years old were delighted at the gesture. They also thanked the AIG Hassan for his fatherly love and care and they all took time to shake hands with the AIG Hassan.
Other officers who visited the home included the Deputy Commissioner of Police in charge of Administration, Ogun state Command, DCP Christian Okoye, Deputy Commissioner of Police in charge of Investigation, DCP Sina Olukolu, Deputy Commissioner of Police in charge Operation, DCP Bello Makwashi, CSP Adebowale Lawal, Zonal Police Public Relations Officer as well as DSP Muyiwa Adejobi, Police Public Relations Officer Ogun state Command.