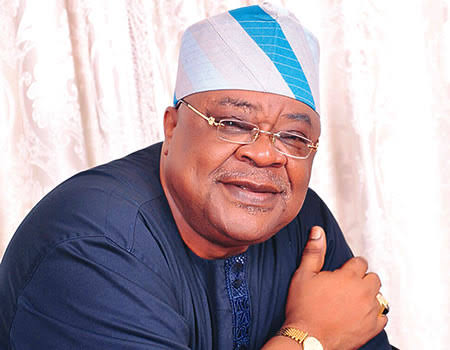 The governorship candidate of the Action Democratic Party (ADP) in Oyo State and former governor of the state, Adebayo Alao-Akala have given details of how alliance talks between his party and other opposition parties in the state broke down.

He also revealed that he has decided to work with the All Progressive Congress (APC) candidate in the state, Adebayo Adelabu, to ensure his success in the March 9 governorship election, but still remains a member of the ADP.

Alao-Akala made the revelation at his Bodija, Ibadan residence.

His words: “I remain in ADP and all our candidates for the House of Assembly seats will stand the March 9th elections on the platform of the ADP with my full support but I will work for the victory of Bayo Adelabu.”

He explained that his alliance with APC is based on the party’s belief that the ADP can perform optimally and has a strong grassroots network not only in Ogbomoso but also in Ibadan, Ibarapa, Oke-Ogun and Oyo.

“Our core values and philosophies as indicated in our ADP manifestos, ‘Rescue Mission Agenda, have been adopted by Bayo Adelabu with the Presidency as witness. I have therefore as a candidate of ADP, accepted to support Adelabu of APC for victory and therefore form a coalition government.

“My solemn gratitude goes to our members, state and national leaders of ADP for the ample opportunity given to me to lead and fly the flag of the party. Though, my decision is a very tough one, it is for the progress of Oyo State.”

Alao-Akala said his decision following the outcome of the just concluded presidential and National Assembly elections was based on the outcome of some incidents.

He said: “It is widely known that I initiated alliance talks with the main opposition parties in Oyo State vis-a-vis my great party – the Action Democratic Party ((ADP), the African Democratic Congress (ADC), the People’s Democratic Party (PDP) and the Zenith Labour Party (ZLP) with my boss, the former governor of Oyo State and Osi Olubadan, Senator Rashid Adewolu Ladoja as mediator.

“Meanwhile, during the alliance process, I received an emergency call from the Presidency. In the meeting with the Presidency, I was prevailed upon to work for APC. My response was that I should be given 48hrs to consult with my people, the opposition parties’ alliance committee as well as the teeming members, the leaders and the stakeholders of my great party, ADP.

“On resumption of the alliance meeting, my boss (High Chief Rashid Adewolu Ladoja) told me point blank in the presence of other governorship candidates that I was not in consideration for Governorship due to my place of birth – Ogbomoso. According to him, “we need an Ibadan man to slug it out with another Ibadan man, which is Bayo Adelabu,” With the statement, my geographical place of birth is the only crime I committed.

“Since I’ve been unfairly and technically booted out of the alliance talks, I consulted with my party stakeholders and supporters whose support have brought me this far. Having realised that my 2019 governorship agenda cannot be realised in isolation based on the present situation, the only option remaining for me is to form an alliance with Mr. Bayo Adelabu of APC.

“I, Otunba Christopher Adebayo Alao-Akala – the Oyo State 2019 Action Democratic Party (ADP), have decided to form an alliance with the governorship candidate of the All Progressives Congress (APC), Mr. Adebayo Adekola Adelabu ahead of the March 9 Governorship and state House of Assembly Elections in the state. However, all the ADP candidates for the House of Assembly seats will go to the elections with my maximum supports.”