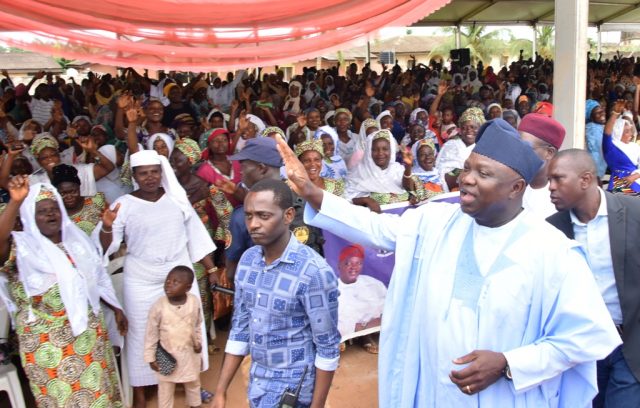 Governor Akinwunmi Ambode of Lagos State on Tuesday celebrated Democracy Day with Muslim faithful, saying despite all that had been achieved in the past, Lagos was still a work in progress, and that conscious efforts would continue to be made to further invest in infrastructural development to make life easier for the citizens.

The Governor Ambode, at a special Ramadan Tafsir and prayer held in Epe to commemorate the three years of his administration and Democracy Day, justified the massive infrastructural renewal across the length and breadth of the State, explaining that the huge investment in upgrading and providing amenities for the people was part of the greater vision towards making Lagos a smart city.

He said deliberate efforts have been made since assuming office to place the State on sound pedestal for growth and development, and as well align the State with other smart cities across the world.

“Lagosians have seen what we have done in the last three years but like we have said, there is a greater vision to make Lagos a Smart City. So, Lagos is a work in progress and that is why you see a whole lot of infrastructure project going on.

“Every day is a race towards making Lagos a better place for the citizens and that is what we would continue to do in the next 365 days,” the Governor said.

He said the special prayer, which was attended by both political and Islamic leaders from all the five divisions of the State, was organised to appreciate God for His goodness to the State and the feats attained by his administration so far.

“Exactly three years ago today, by God’s grace we took oath of office at Tafawa Balewa Square (TBS) and today is also Democracy day. In celebrating today, I decided that the best way is to come together with my Muslim brothers and sisters and share word of prayers with them through this special Tafsir to appreciate God for the success of the journey so far.

“You would recall that we had a Church Service on Sunday and I just think the best way to end it is to get prayers from Muslim clerics also, and that is what the unity we are preaching is all about. There is nothing bigger than prayer and that is why I am so happy that we started this journey with prayer and we are celebrating three years with prayer.

“For me, there is nothing more to say than to give thanks. I thank God and I also appreciate you all that our prayers have been answered. What we have done and still doing in Epe, Badagry, Ikorodu, Ikeja and every other part of the State will continue and we pray that God will give us the grace to do more for the people,” Governor Ambode said.

“We appreciate our Governor who has been doing well in the last three years for the State and we pray that the second term will be a success. There is a saying that one good turn deserves another and we pray that that is how it will be,” he said.

Also, Commissioner for Home Affairs, Dr. Abdulhakeem Abdullateef, said the entire Muslim Community in Lagos was at the prayer to rejoice with the Governor on his third anniversary and also to celebrate Democracy Day.

“Today is a day of commemorating good governance, rule of law, constitutional democracy, happiness for the people and the enhancement of their living condition. So, the entire Muslim Community in Lagos are here and that is what the Chief Imam of Lagos just said that they have come to even endorse the Governor entirely for second term and also to give thanks to almighty Allah who has given the Governor the ability and the capability to deliver on his electoral promises,” Abdullateef said.