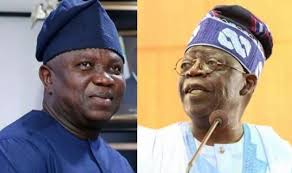 Governor Akinwunmi Ambode of Lagos State has refuted rxistence of any conflict between him and the national leader of the ruling All Progressives Congress, APC, Asiwaju Ahmed Bola Tinubu over APC governorship ticket for 2019.
Ambode in Epe during the election of delegates for the Presidential primary election and national convention of the party told APC members that the reports indicating a fight between him and Tinubu were out of place, and there was no such fight anywhere.
“I want you to know that there is no fight anywhere. The National Leader, Asiwaju Bola Ahmed Tinubu, and my good self, we are not in any fight, we are not in any controversy.
“We are praying to God that the best is yet to come and the best will be what Lagos State deserves and I want you to just continue with your prayers that at this time, God will show His hand and make sure that everything that is of blessing to Lagos State and also blessing of Epe will come to pass,” Ambode was quoted as saying.
The governor commended the zonal APC leaders and party faithful who contributed to the success of the delegates’ election in Epe, saying APC remained the party to beat in Lagos and Nigeria.
Ambode declared: “We have just concluded our Delegates’ Election in Epe Local Government and by consensus, we have picked our three delegates that will be going to the National Convention come October 6 for the Presidential direct primaries and the convention for all other people.
“I want to say a very big thank you to all our delegates that are present here; I want to say a big thank you to all our leaders that have also supported us to make sure that this event has come and is done very successfully.
“I want to reiterate once again that our party, All Progressives Congress (APC) remains the party to beat; we are the party at the national level and we are going to remain the party in the State.”
The election of delegates for the national convention was held at APC Secretariat in Aiyetoro, Epe, with three national delegates from Epe Division — Alhaji Shakiru Seriki (Bamu), Otunba Bode Alausa and Mrs. Olayinka Oladunjoye, Commissioner for Commerce, Industry and Cooperatives, elected.
The division comprises one Local Government Area (Epe) and two Local Council Development Areas (Eredo and Ikosi-Ejirin).
The party leaders and faithful in the division also affirmed their support for the second term bid of the governor.
Those listed include the Chairman of Epe Local Government, Adedoyin Adesanya; Chairman of Eredo LCDA, Saliu Adeniyi; Chairman of Ikosi-Ejirin LCDA, Samson Onanuga and party chairman in Epe Local Government, Otunba Kehinde Adeniyi.
Also included are State Welfare Officer, Alhaja Abiodun Bankole; former member of House of Representatives representing Epe, Hon Bola Gbabijo and member of Lagos State House of Assembly representing Epe Constituency II, Segun Olulade.
APC Women leader in Epe, Mrs Iyabo Adegboyega; LGA party secretary, Alhaji S.A Owolomose; youth leader, Abdul Ibrahim; Otunba Bode Alausa, Akin Oladipupo, among others, were also listed among the party faithful at the event.

Share this on WhatsApp
Related Topics:Ashiwaju Bola Ahmed TinubuGov. Akinwunmi Ambode of Lagos State
Up Next