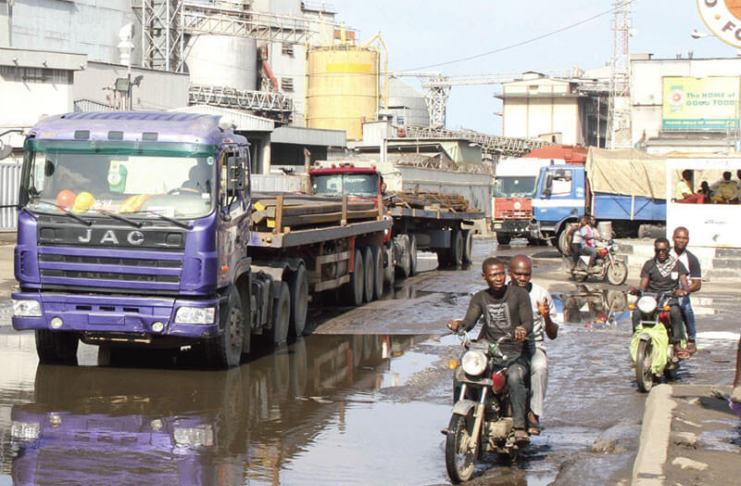 Capt. Emmanuel Iheanacho, Former minister of Interior and Chairman of Integrated Oil and Gas Nigeria Limited, has said that the solution to the perennial traffic gridlock in Apapa is for the Federal Government to acquire old buildings around the port town and demolish them towards redesigning of the Lagos ports.

Iheanacho explained that the terrible traffic situation in Apapa is not necessarily caused by the tank farms operating around the port or the activities in the port but government not matching the increase in the volume of business with the needed expansion.
He warned that if the challenges are not addressed, tank farm operators might begin to have challenges in distribution of fuel across the country. He advised that a commission should be set up to cut across all port operators including shipping companies, regulators, customs and immigration among others. According to him, such commission should also be assisted with the availability of empirical data on the business volume assumptions when the ports were constructed several years ago.
LASTMA gets 1,400 new officials Meantime, in a bid to curb traffic gridlocks on Lagos roads, the Lagos State Traffic Management Authority, LASTMA, yesterday, said it has engaged over 1,400 new graduate traffic managers. LASTMA Chief Executive Officer, Chris Olakpe, said  that the new officials were trained on effectiveness traffic management within Lagos metropolis. Olakpe said that various orientation and training programmes were undertaken for LASTMA officials on traffic control and management to ensure professionalism in the discharge of their duties.
He said: “The trainings are ongoing to capture the old officials within the state to blend with the newly recruited graduates. “About 1,400 new officials were recently recruited and trained to bring improvement, discipline and curb gridlocks within the state.
ALSO SEE: Stop buying table water, financial experts advise
“We have about 4,250 LASTMA officials to ensure free flow of traffic on various routes in Lagos State.” The LASTMA boss said that the officials were trained on protocol of arrest, surveillance and traffic management. Olapke added that there were various disciplinary departments at the agency to punish any official who is found wanting in the line of duty. “We have departments and sections that deal with discipline like provost marshal’s office, surveillance and monitoring unit and LASTMA complaint units.
“All these sections are in position to deal with any official who disobey the rules and regulations of the authority,” he said. Eight LASTMA officials were on Aug. 14 sacked for receiving bribes. The LASTMA chief executive said that the authority had been working assiduously to reduce gridlocks in Apapa and its environs. He said that the agency had established “Operation Keep Traffic Moving” to ease gridlocks in Apapa and other parts of the Lagos metropolis.
“LASTMA has been assisting in the movement of traffic in Apapa by trying to streamline traffic; it has been doing its best to reduce the gridlocks being experienced in the area,” he said.
Share this on WhatsApp
Related Topics:Apapa trafficCapt. Emmanuel iheanachoformer Minister of Interior
Up Next